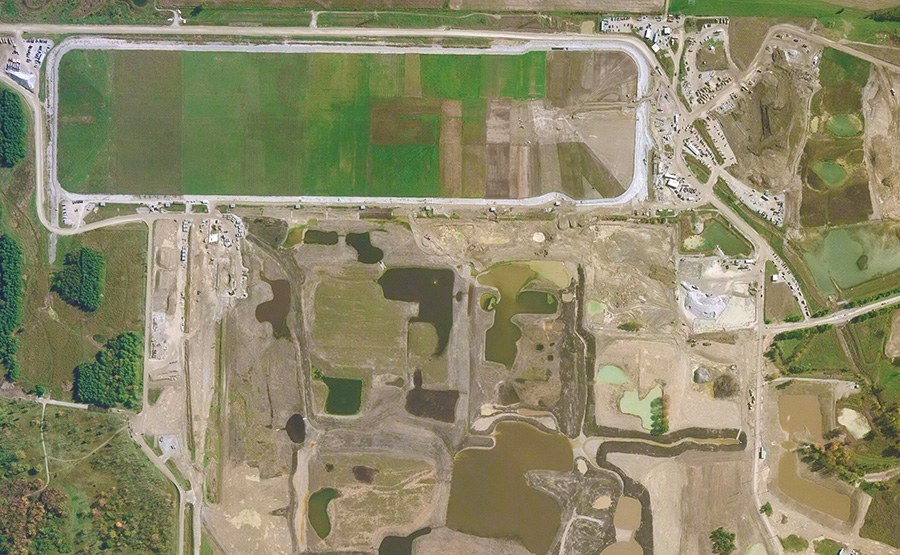 The Feed Production Center at the Fernald site was a uranium processing plant under the Atomic Energy Commission and operated by U.S. Department of Energy (DOE) until 1989. Over its history, the plant refined and machined 500 million pounds of uranium metals. After 1989, the site was placed on U.S. EPA's Superfund list due to land and groundwater contamination resulting from the years of operation. The Fernald Closure Project Team, tasked with overseeing the removal of 31 million pounds of processed nuclear product, decontamination and demolition of 223 buildings, and removal of 8,900 cubic yards of radium-bearing waste, needed an on-site disposal facility (OSDF) to safely contain LLRW and HW generated during the demolition and site cleanup process.

In 1995, Geosyntec was selected as the engineer-of-record for the permitting, design, and quality assurance/quality control (QA/QC) services during construction, filling, and closure of the OSDF which took place in 2006. The result is a secure 65-acre, eight-cell waste containment facility containing 2.95 million cubic yards of materials and capable of lasting at least 200 years, and up to 1,000 years to the extent achievable with available technology. The major design components include a double-composite liner system underlying the waste, an almost 10-foot (ft.) thick final cover system which includes an innovative 3-ft thick biointrusion barrier to prevent invasion by plant roots or burrowing animals, surface water management and erosion retardence systems, double-containment leachate conveyance system, as well as vadose-zone and groundwater monitoring systems. Geosyntec's team conducted extensive evaluations of the various design components and built in redundant systems throughout to assure the system's long-term performance and ability to protect public health and the environment.

After declaration of closure of the OSDF designed by Geosyntec Consultants, Mr. Uday Kumthekar, P.E., Fernald Closure Engineering Manager, stated, "A 1992 government report forecasted completion of cleanup in 2019 at a cost of $12.2 billion. The site cleanup was declared complete by Fluor Fernald on 29 October 2006 at a total cleanup cost of $4.4 billion. The accelerated schedule and cost savings were possible due largely to regulatory approval of on-site disposal facility (OSDF) of almost 3 million banked cubic yards of low level radioactive and RCRA wastes." Geosyntec was able to meet (and in many cases exceed) all the criteria set forth by the U.S. DOE within the rigorous 15-month regulatory approval schedule. Geosyntec's 90 percent design submittal was accepted as final by the regulatory agencies and DOE and was a major milestone achievement in accelerating completion of the project. This project was recognized for its accomplishments by the American Council of Engineering Companies for engineering excellence.