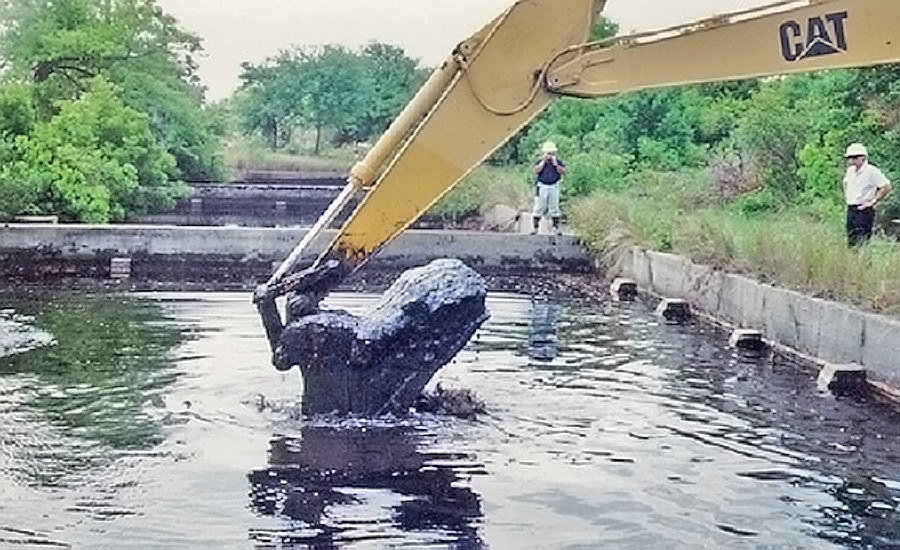 Geosyntec's characterization services depended upon the innovative use of 2-D and 3-D GIS applications to properly communicate the relevant conceptual models to the client and to the regulatory agencies. Geosyntec also used groundbreaking modeling applications for groundwater flow, contaminant transport, and geochemistry

Soils Time Critical Removal Action: The early stages of the project called on Geosyntec's ability to manage a large-scale characterization and remediation project using nearly real-time data collection and decision making. To facilitate the collection of more than 6,000 soil samples, Geosyntec employed on-site laboratories for rapid data turnaround. The 180,000 cubic-yard removal action, among the largest in the southeast, was performed continuously from initial characterization to closure in 2.5 years.

Groundwater RI/FS: Releases of caustic (sodium hydroxide) and process brines resulted in the formation of a dense, non-aqueous phase liquid pool. This liquid had a pH in excess of 13, total dissolved solids in excess of 100,000 parts per million, and high concentrations of dissolved mercury. By demonstrating the process by which high-mercury groundwater in the caustic brine pool migrated to a lower-pH setting, at which point the mercury combined with naturally-occurring sulfides to precipitate out of solution, Geosyntec concluded the natural attenuation processes were sufficient to limit the metals plume to the upland setting, thereby mitigating transport to the downgradient receptor (estuary)

Marsh Time Critical Removal Action: Estuarine work at the 450-acre saltwater marsh began in concert with the soils action. Geosyntec performed channel sampling and grid characterization of the marsh flats to develop a removal action approach for the marsh. A key component of this characterization work entailed Geosyntec's clear determination that impacts of mercury and PCBs were limited to the top 12 inches of marsh sediment. Geosyntec used a mass-removal efficiency approach to the marsh through the use of geostatistical interpolation to evaluate mass removal as a function of excavation volume. Geosyntec demonstrated that the removal of 13 acres of marsh flat and selected channels effected a mass removal efficiency of 50% for both mercury and PCBs across the entire 450-acre marsh. In addition to the conceptual design, Geosyntec provided detailed design and construction quality assurance (CQA) services for the 18-month construction project.

Ecological Risk and Monitoring: Geosyntec managed the BERA for the upland soils and estuary. The estuarine portion of the site was divided into three major sections. A total of 52 sampling stations were established throughout the marsh and evaluated for sediment and surface water chemistry, chronic toxicity of surface water/sediment, benthic invertebrate community structure, and chemical body burden in a variety of fish, blue crabs, fiddler crabs, marsh grass, and insects. The risk assessment entailed the use of additional geostatistical analyses of the 700 sampling locations. The U.S. EPA considered a second action to remove additional sediments in the estuary. Following regulatory acceptance of the BERA and negotiations with the U.S. EPA, GAEPD, and the US Fish and Wildlife Service, it was determined that a marshland monitoring program would be more appropriate. Monitoring programs allowed the Georgia DNR to significantly relax the fish consumption advisories.

Through Geosyntec's proactive field characterization efforts and the use of data management, GIS, geochemical modeling, and groundwater flow and transport modeling, our client, the regulatory agencies, and the public have benefited from a monitored natural attenuation demonstration for mercury in groundwater, the rapid completion of a significant soils removal action designed to manage long-term risks, and the restoration of local fisheries through rapid marsh remediation.