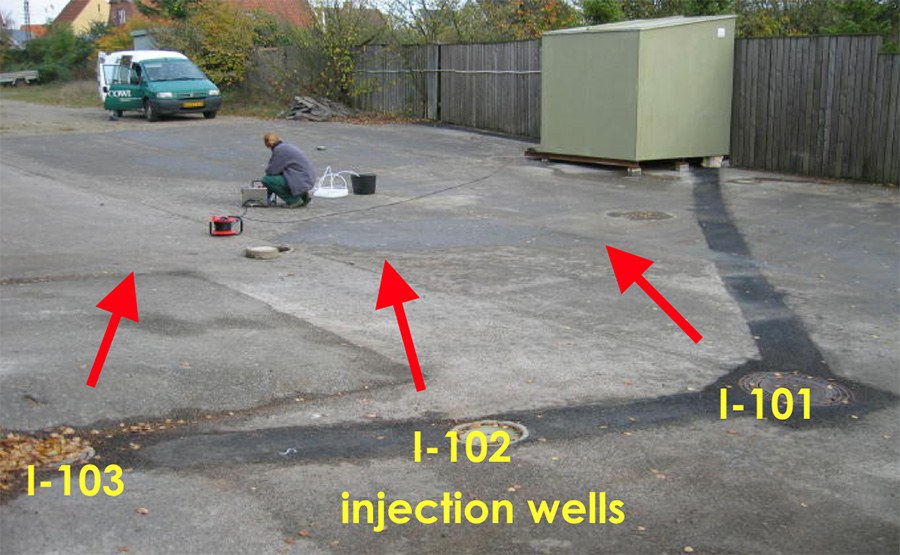 Consequently, the Danish Environmental Protection Agency and the former Funen County commissioned a field demonstration to quantify the performance of ERD at a Danish site. A team of bioremediation experts consisting of Geosyntec, COWI A/S, and the Danish Technical University (DTU) was selected to conduct the demonstration.

Geosyntec directed the design and overall demonstration approach for the project. To maximize the chances for a successful demonstration, we specified that the ERD design use a closed-loop groundwater recirculation to deliver electron donor (sodium lactate) to the target treatment zone. Potential benefits of groundwater recirculation include improved delivery/flushing of electron donor, increased treatment residence time, increased bacterial growth rates, and overall increased ERD treatment rates relative to passive ERD designs. The design also employed bioaugmentation with a mixed dechlorinating bacterial culture (KB-1®) containing Dehalococcoides bacteria. Dehalococcoides are a naturally-occurring bacterial strain capable of degrading chloroethenes to innocuous ethene and ethane. We directed numerical groundwater flow modeling that was used to design the layout of the recirculation injection and extraction wells and system flow rates. We also designed the electron donor and bioaugmentation dosing for the system. In addition, we were substantially involved in the performance monitoring design and results analysis.

Geosyntec led the design of the first rigorous demonstration of ERD in Denmark. The project also represented the first use of in situ bioaugmentation in Scandinavia. Although the demonstration was performed over a short duration of seven months, it was considered to be highly successful, as more than half of the cDCE and VC in the treatment zone were converted to innocuous end products, and substantial growth in Dehalococcoides was observed throughout the course of the demonstration. The project was also one of the first to demonstrate the critical role that Dehalococcoides that contain VC-reductase (vcrA) genes play in ERD performance in the field. Geosyntec co- authored a journal article in Environmental Science and Technology that described the high-quality experimental approach and data generated in this project (see: http://pubs.acs.org/doi/abs/10.1021/es800764t). On the basis of the highly successful results of Geosyntec’s design, ERD is now used widely for chlorinated solvent remediation throughout Denmark.