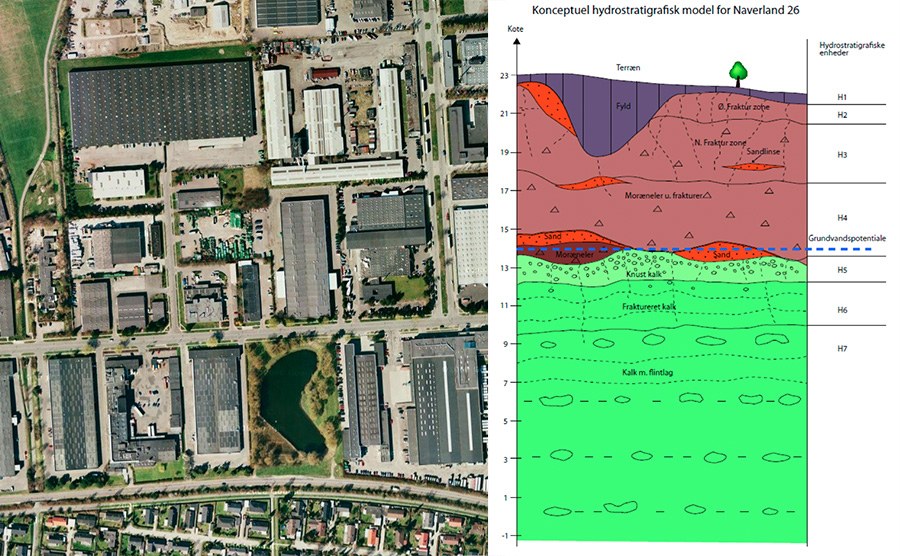 The Naverland 26 site in Albertslund, Denmark was operated as a large-scale dry cleaner from 1965 to 1983. During this period, an estimated 5,000 tons of perchloroethene (PCE), 1,500 tons of trichloroethene (TCE), and 200 tons of 1,1,1-trichloroethane (TCA) were handled. PCE was delivered in tankers and transferred to an underground storage tank, while TCE and TCA were delivered and stored in drums. Previous studies at and around the site revealed extensive groundwater contamination from spilled or leaked chlorinated solvents, which likely resulted in the lateral and vertical migration of solvent dense nonaqueous phase liquid (DNAPL) through the clay till and into the limestone underlying the site.

To meet the project objective, Geosyntec and COWI developed a site investigation strategy to provide a comprehensive dataset for constructing a detailed conceptual model, identifying data gaps and uncertainties, and evaluating DNAPL remediation options. Geosyntec also provided expert advice regarding the selection and application of current and emerging technologies for the direct and indirect observation of DNAPL in fractured geologies. A range of site investigation tools was proposed based on the principle of combined lines of evidence, and the premise that a single technique alone is not sufficient to fully delineate DNAPL distribution. Key to this strategy is the selection of technologies with multiple scales of measurement, of which there are two main categories. The first category provides qualitative, dense spatial data, often with higher detection limits over a preset value.

These methods are generally of lower cost, produce vertical profiles of real-time data, and are primarily used to identify site areas that require further investigation. Examples of such "decision quality" methods are laser-induced fluorescence profiling and membrane interface probing. These first category methods produce qualitative data that are used to guide the sampling strategy for the application of the second category of technologies that are typically compound- specific and generate quantitative, precise data that have low detection limits. These second category methods tend to be higher cost with longer turnaround times that preclude on-site decision making, hence applying them to quantify, rather than produce a conceptual model, facilitates a key cost saving. Where these two categories of measurement technologies are used in tandem, a more complete and accurate dataset is achieved and additional site mobilizations are limited.

Geosyntec successfully identified a state-of-the-art strategy and methodology for characterizing DNAPL impacts in groundwater at a Danish megasite. The outcomes of the project will be presented at a workshop for Danish regulators on the use of tools for the delineation of DNAPL source zones. Additionally, as a result of this project, Geosyntec was invited to deliver a sponsored keynote presentation at a conference of the Danish Academy of Technical Sciences.