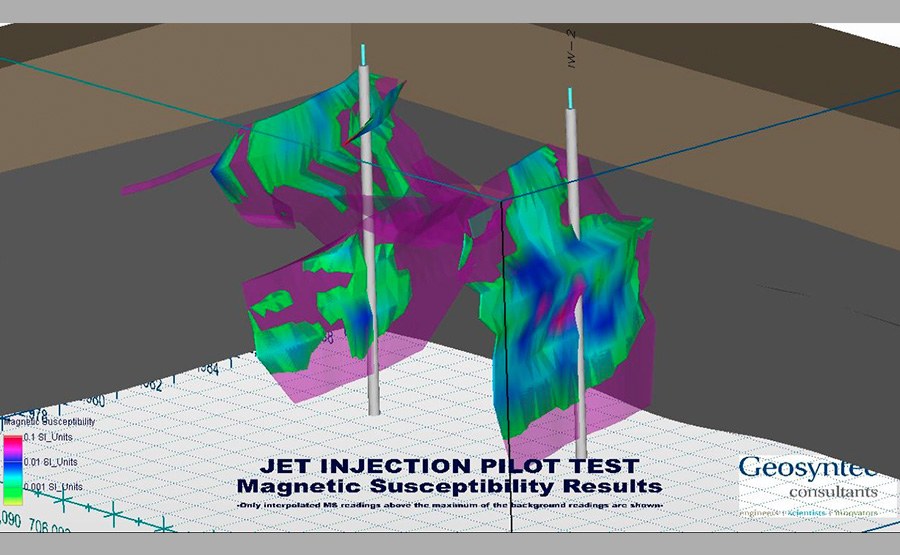 Microscale zero valent iron (mZVI) and nanoscale ZVI (nZVI) are often effective amendments for remediation of chlorinated solvents in aquifers, but success with mZVI and nZVI in aquitards such as clay till is rare when conventional injection techniques are used. Jet Injection, a technology developed by FRx that involves a combination of hydraulic fracturing and jetting, was previously demonstrated to effectively distribute sodium permanganate in a tight clay formation. Jet injection forces large volumes of water under very high-pressure into the subsurface inducing fractures that can be filled and further propagated with a slurry of remediation treatment agents such as permanganate or mZVI. Recognizing that Geosyntec possesses expertise with this technology, the Capitol Region of Denmark retained the team of Geosyntec, FRx, and COWI A/S to design and execute a jet injection pilot test in clay till at a Danish site.

Geosyntec designed and implemented a novel pilot test of jet injection of nZVI and mZVI into clay till. Geosyntec expedited and focused its services to meet the client's compressed implementation schedule; the pilot test design and implementation were completed within two months of receiving client approval for the work. The pilot test involved the jet injection of nZVI in one well and mZVI in an adjacent well at five depth intervals per well. Rhodamine-WT dye was added to the injectate in both wells to serve as a tracer to assist in determining radius of influence.

After the completion of the ZVI injections, Geosyntec characterized the ZVI distribution within the clay visually and analytically by excavating a large area around each of the injection wells. The 18m x 24m excavation was centered on the two injection wells and was benched down to a depth of 7m. Excavation activities occurred over the course of two weeks and the high resolution characterization was completed every 60cm of depth. Three characterization techniques were employed to examine the ZVI distribution: visual identification and GPS mapping of the ZVI and Rhodamine WT, sampling of soil for total iron analysis, and magnetic susceptibility measurements, which provided a proxy for emplaced ZVI concentration. These data were incorporated into a 3-D visualization of the primary fracture network. Jet injection succeeded in distributing both mZVI and nZVI greater than seven meters horizontally from each well, a dramatic improvement relative to previous injection techniques attempted in clay till.

This project represents the first-of-its-kind application of jet injection for the distribution of mZVI and nZVI in low permeability soils. High resolution characterization techniques were used to collect ZVI distribution and geologic data, which enabled the mapping and 3-D visualization of the primary ZVI-filled fractures. The success of this project suggests that jet injection offers an effective solution for delivering remediation materials to chlorinated solvents source zones in low permeability soils.