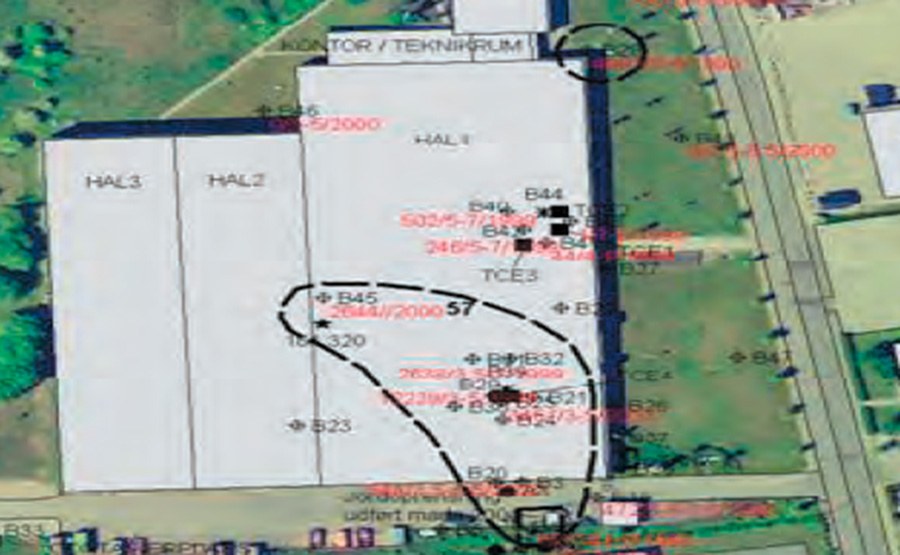 Trichloroethene (TCE) and hexavalent chromium (CrVI) have impacted shallow groundwater beneath an active manufacturing facility in Svendborg, Denmark. The site is primarily underlain by moraine clay deposits, and a thin sand layer is continuous across much of the site. A plume of TCE and CrVI is present in the sand layer where TCE concentrations typically range from 1 to 20 mg/L, and CrVI ranges from 0.5 to 7 mg/L. Cis-1,2-Dichloroethene (cDCE) has accumulated at some locations, but only trace quantities of vinyl chloride (VC) are present in the primarily oxidizing aquifer. An existing groundwater extraction well operates at the site, pumping approximately 3 L/min to a publicly owned treatment facility.

The principal source area was excavated in March 2004, when 800 tons of TCE-contaminated soil were removed. The lower portion of the excavation was backfilled with sand to facilitate subsequent injection of electron donors. The lead consultant at the site, COWI A/S, subcontracted Geosyntec Consultants to design and provide operation oversight of an enhanced in situ bioremediation (EISB) system for treatment of the TCE and CrVI plume.

Geosyntec assisted COWI with the design of a recirculatory, semi-active EISB system that takes advantage of the existing groundwater extraction system and uses groundwater recirculation to deliver a high-concentration pulse of dissolved lactate to the sand layer on a bimonthly basis. The forced-gradient flow field enhances the distribution of lactate throughout the plume. After a two month aquifer conditioning period, strongly reducing conditions which are required for this type of groundwater treatment were evident in most wells throughout the treatment zone. Consequently, 12 wells throughout the plume were bioaugmented with the Dehalococcoides bacterial culture KB-1® to promote complete transformation of TCE, cDCE, and VC to non-toxic ethene. Within five months of bioaugmentation, enhanced reductive dechlorination was evident, resulting in significant accumulation of ethene. Within one year of system start-up operation, all of the CrVI had been treated to concentrations below detection limits. Performance monitoring is ongoing.

The bioremediation remedy was successfully designed to effectively treat contamination underneath the manufacturing building, with no disturbance to the manufacturing activities. The remedy also achieved cost savings by exploiting the pre-existing groundwater extraction system at the site.