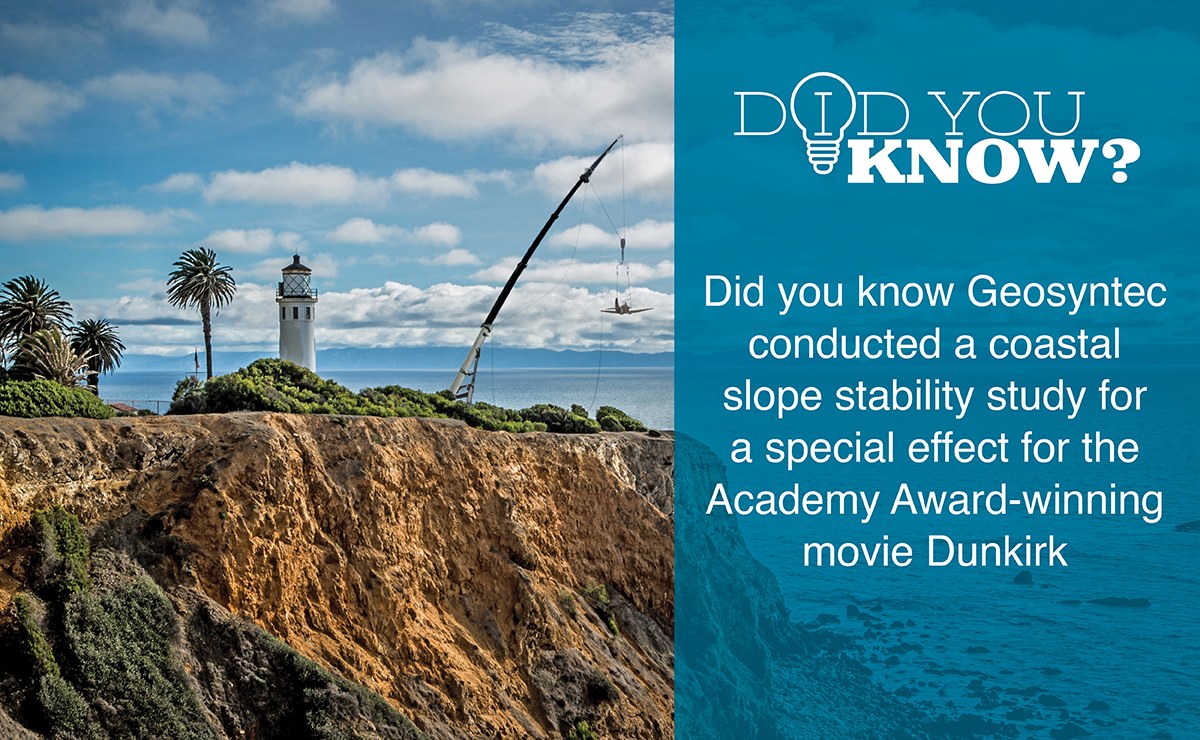 Acclaimed director Christopher Nolan had chosen the Point Vicente sea cliff in California as a desired filming location. The film shoot production required the use of a 30,000-pound base with a gimballed aircraft fuselage set piece to be used near the 100-foot sea cliff edge. In addition, a 100-ton crane using outriggers was needed to move the set pieces. To obtain a permit for the film shoot, the United States Coast Guard (USCG) who owns the property required a slope-stability evaluation be submitted and approved to ensure filming layout set-back distances avoided slope disturbances or failures. The evaluation and report were required to be performed within 10 days to allow the film shoot to continue on schedule.

Geosyntec performed a review of available geologic maps and reconnaissance geologic mapping of the sea cliff to assess the nature of the geologic materials and orientation of rock discontinuities that could be zones of stability weakness. Based on the site-specific geologic mapping, Geosyntec developed a critical cross-section to support the slope stability analyses. A series of limit equilibrium slope-stability analyses were performed to evaluate the potential for a circular/rotational or sliding block failure associated with closely fractured conditions of the Altamira Shale. The rotational stability analysis was performed with the computer program Slope/W [Geo-Slope, 2007]. Static with temporary loading conditions were assumed. Following completion of the slope-stability analyses and incorporating a conservative factor of safety of 1.5, Geosyntec recommended the edge of the movie set base could be no closer than 10 feet from the cliff edge to avoid slope disturbances or failures.

Geosyntec's muti-office team prepared and delivered the technical memorandum (TM) within the compressed schedule for USCG's review and approval. Timely acceptance of the TM allowed the scheduled production to proceed as planned. The film shoot layout conformed to the site set-back criteria as well as the director's aesthetic needs, with filming successfully completed and no cliff-face failures or slope disturbances occurring.