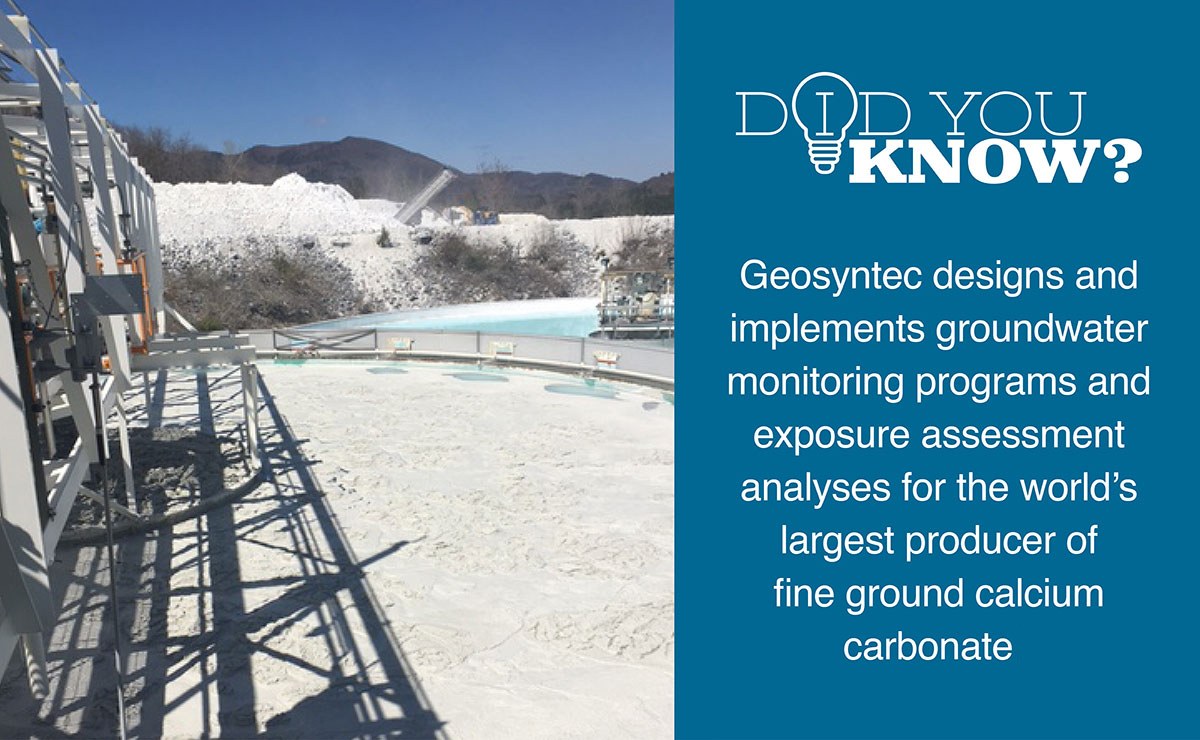 Omya, Inc., of Florence, Vermont is the world's largest producer of high quality ground calcium carbonate (GCC) from marble bedrock, which is extracted from off-site quarries. GCC is an important component in many paper, paint, and plastic products. Processing activities at the facility produce slurried tailings residuals which are piped to a settling basin to reduce water content, and then trucked to on-site former bedrock quarries for disposal. Organic chemicals are used in the grinding process to float out non-calcium carbonate minerals, which in turn become part of the slurried tailings residuals.

Project-specific state legislation was passed to determine if operations at the Omya plant were causing risk to human health or the environment. Originally, the project was directed by an Oversight Team comprised of citizen groups, legislators, Omya executives, and regulators, to address concerns from numerous stakeholders and pending litigation. An expert team, including Geosyntec, was retained to determine if chemicals within the tailings were leaching to groundwater and migrating to downgradient receptors such as surface water bodies, and private and public wells.

Geosyntec's initial work included a detailed review of previous environmental reports and conducting numerous meetings with Oversight Team members, Omya's other environmental consultants, plant operations managers, and regulators to evaluate the existing body of data. The detailed Phase I report, prepared by Geosyntec, presented a summary of data gaps with respect to understanding the conceptual exposure model for the site and the ability to determine risk to human health and the environment.

Although Geosyntec's study demonstrated there was no significant risk to the environment or humans, our team identified a toxic chemical used in Omya's process (previously not considered a contaminant of concern) that had been released to on-site groundwater and stormwater. Geosyntec helped Omya make significant modifications to its tailings dewatering process and modify its stormwater management plan to reduce migration of this chemical. After developing a high level of credibility and trust as neutral technical experts, Geosyntec staff effectively testified on several occasions in the Vermont Legislature to present the results of this study.

For over ten years, Geosyntec has performed semi-annual groundwater monitoring, exposure assessment analyses, and permit assistance for Omya's five-year permit renewals. Geosyntec continues to work with Omya to further reduce the potential for chemical exposures in their operations.