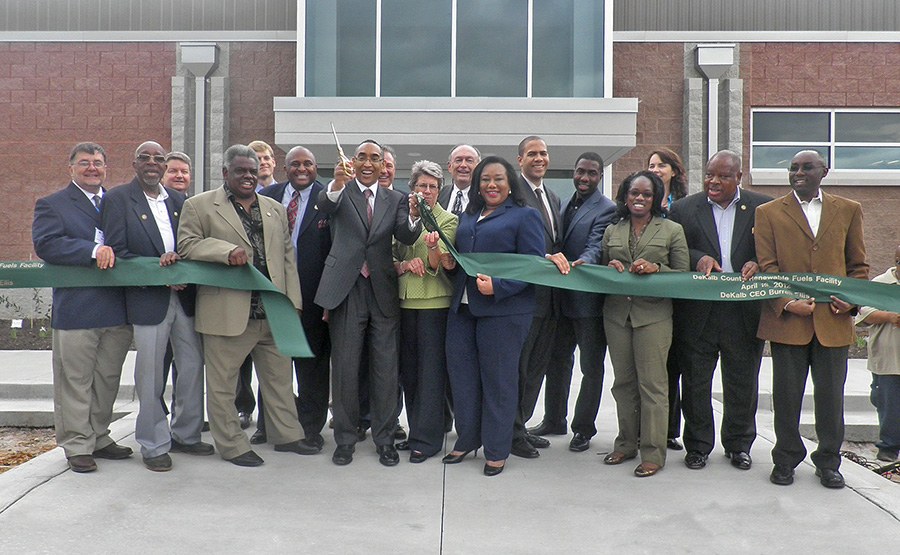 DeKalb County (DeKalb) wanted to expand its ability to use excess landfill gas (LFG) at its Seminole Road Municipal Solid Waste Landfill for beneficial use. DeKalb desired to: (i) construct a facility that would convert LFG to renewable natural gas (RNG); (ii) add a third engine to an existing Green Energy Facility (GEF) producing electric power through landfill gas-fired reciprocating internal combustion engines; and (iii) install a second flare to increase the capacity to burn LFG when both the GEF and the LFG to RNG were down.

Because this facility is located in Atlanta's Nonattainment Area (NA) for ozone emissions, it is considered a New Source Review (NSR) NA major source. Therefore, it may only increase its nitrogen oxides (NOx) and volatile organic compounds (VOCs) emissions by 25 tons every five calendar years. Otherwise, costly and time consuming NSR NA permitting would be required. The site also is a Prevention of Significant Deterioration (PSD) major source for carbon monoxide (CO), and NSR PSD permitting would be required if CO emissions increased by more than 100 tons per year.

Geosyntec assisted DeKalb in obtaining a Department of Energy (DOE) petroleum reduction matching grant that paid for half of the LFG to RNG facility. The DOE grant was for "shovel ready" projects and therefore had associated quick deadlines. For the LFG to RNG facility, Geosyntec was able to document that it was exempt from construction air permitting requirements based on minimal emissions, and obtained a modification to add this operation to SRLF's Title V Operating Permit. This allowed DeKalb to meet DOE grant deadlines.

Geosyntec sought to demonstrate that combined emissions from the third engine and new flare did not increase the facility's emissions by more than 25 tons of NOx or 100 tons of CO in order to avoid NSR NA and PSD permitting. Since the proposed third engine at the GEF was identical to the first two, those emissions were already established. However, emissions from traditional open and enclosed flares at the required flows would have triggered the threshold for NSR NA or PSD permitting. Therefore, Geosyntec had to find new technology that would meet requirements.

Geosyntec identified an innovative enclosed burner technology that had been used internationally at landfills that met the requirements. In addition, the technology allows lower methane content gas to be flared than traditional flare technology, which enabled the waste gas stream from the LFG to RNG facility to be flared without the need for supplemental fuels or LFG. Emission increases from the new burner/flare using this burner technology and the third engine were less than the NSR NA or PSD permitting thresholds.

Geosyntec assisted DeKalb in obtaining the air permits required to meet DOE operational deadlines for the LFG to RNG facility. We also identified a new innovative technology that could control the dilute waste gas stream from the LFG to RNG facility and allowed for the increase in flare capacity and expansion of the GEF in the restrictive Atlanta Nonattainment Area.