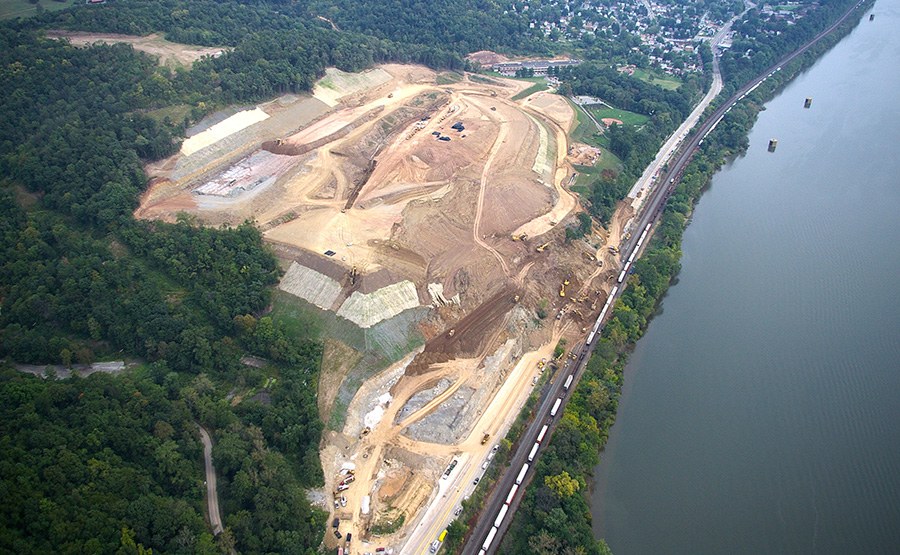 Stabilization of Active Landslide
« All Projects

A large landslide occurred at a site under development by a third party in Western Pennsylvania, impacting an adjacent state highway and rail line. After emergency actions were implemented to reopen the highway and rail line, stabilization of the site was to occur under consent order between the state and the third party. With the goal of stabilizing the site as quickly and efficiently as possible, the prospective purchaser assumed the responsibility of responding to the consent order and retained Geosyntec to develop and evaluate options for stabilizing the site.

One of Geosyntec's earliest steps in developing a stabilization strategy was establishing a baseline for the site using an enhanced instrumentation network. An geotechnical monitoring program was deployed that included more than 20 inclinometers, 90 surface monuments, and 40 piezometers designed to detect ground movements at critical locations across the site. Geosyntec developed a GIS application that allows rapid visualization and interpretation of the measured movements to facilitate stakeholder decision-making. Geosyntec developed several tactics for providing long-term geotechnical stabilization, short-term erosion and sediment control, and long-term stormwater management. Laboratory testing and back analysis calculations were utilized to demonstrate that strength parameters higher than those originally proposed by the regulatory agency would result in satisfactory stability. These strength parameters were used for slope stability analyses to evaluate the intermediate excavation grades and final stabilization grades.

Stabilization of the site was challenging due to the limited work area and desire to eliminate export of fill material. Geosyntec prepared a design to permanently stabilize the active landslide that made innovative use of the more than 300 feet of vertical relief to address stability and stormwater management. The design accounted for: (i) excavation and placement of several hundred thousand cubic yards of landslide debris placed on the site during the emergency actions; (ii) excavation of material impacted during the landslide; (iii) modification of existing grades to improve stability; (iv) construction of a reinforced soil slope to provide additional storage capacity; and (v) a long-term stormwater management system and landscape plan. We provided construction oversight during all phases of rehabilitation.