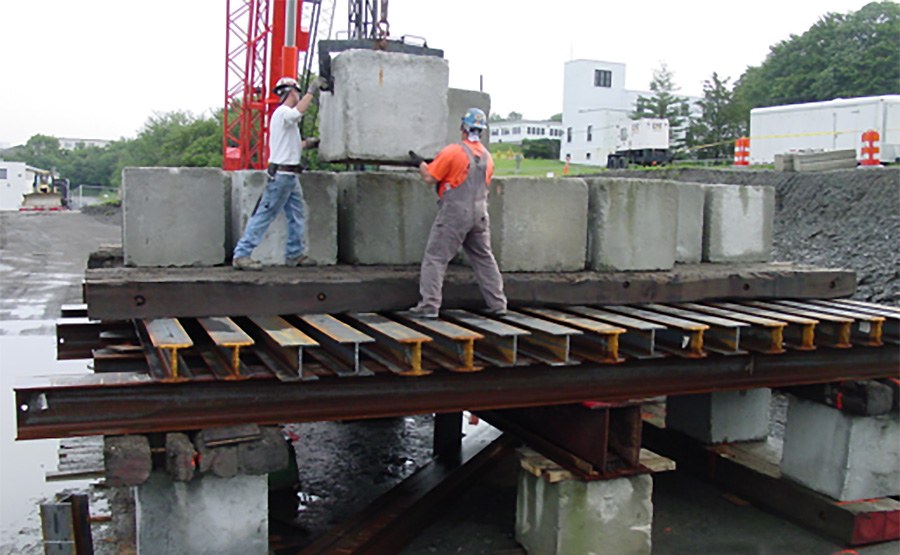 Newport Naval Base in Newport, Rhode Island, had selected a site for a bulk fuel storage tank previously occupied by two underground fuel storage tanks connected by an undocumented trench in bedrock. As a result, the site stratigraphy consisted of a fill material at varying degrees of in situ density from loose to dense above dark gray shale bedrock of the Rhode Island Formation, dipping steeply to the southwest. Because of the challenging subsurface conditions, Geosyntec was selected to provide specialized geotechnical expertise and construction oversight during the installation of an H-pile foundation system to support the bulk fuel storage tank. Design and construction of the bulk fuel storage tank, completed by an outside firm, was funded under a Navy Environmental Multiple Award Contract (EMAC).

Geosyntec conducted a review of the design plans and specifications prepared by others. During the construction phase, Geosyntec reviewed contractor plans and submittals, monitored H-pile installation, selected test piles, oversaw static and dynamic pile testing, and implemented a vibration monitoring program. A pre-construction inspection of nearby sensitive structures was also performed, including installation of crack monitoring gauges at several locations. Geosyntec educated the occupants of two of the nearby structures prior to start of pile driving to help alleviate human sensitivity to the vibrations. Vibration monitoring was conducted throughout the project duration.

Dynamic testing was first performed on four production H-piles selected by Geosyntec. During driving, the strain and acceleration signals were recorded and processed for each hammer blow. A static dead load test was performed on one H-pile. The load applied to the test pile, twice the magnitude of the design load, acted against a dead load reaction platform. Geosyntec used the results of these load tests to determine the driving effort required for the remaining production piles. The H-piles were driven to bedrock using special driving tips that were required to seat the pile in the steeply dipping shale bedrock. Despite the use of these special driving tips, Geosyntec had to apply engineering judgment in the placement of the piles. As observed in the field, if the pile was struck more times than required, the pile began to lean slightly out of vertical due to the steep bedding slope of the shale bedrock.

Geosyntec's pre-construction review of the plans and specifications resulted in recommended changes to reduce monitoring and testing costs. In addition, Geosyntec assisted in a real-time value engineering design change in which five of the planned 69 piles were not installed due to shallow bedrock. Instead, a rock ledge was cleared in this area to a depth of 1-ft below the foundation grade where a geotextile and compacted lift of structural fill were placed.