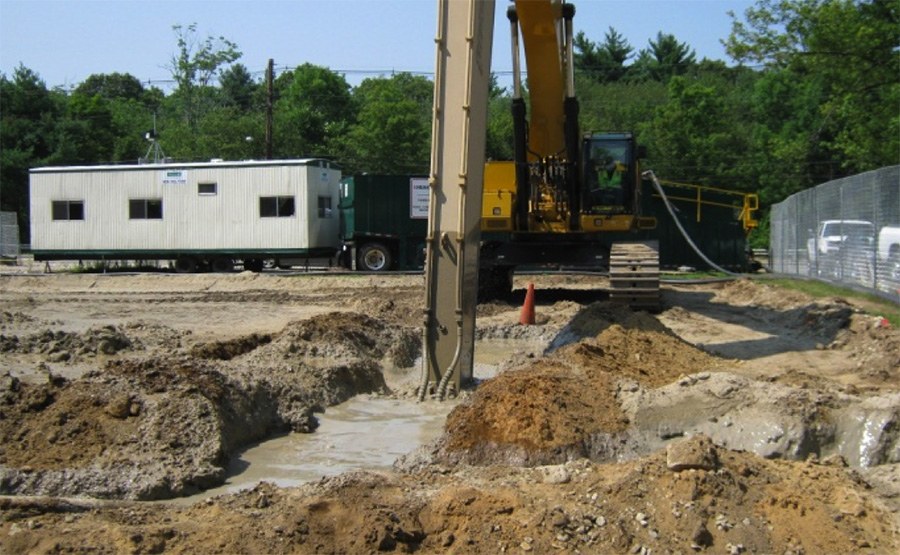 A portion of the privately owned former industrial manufacturing site known as the "Route 44" property was impaired by the presence of contaminants from past site uses. Geosyntec was selected to develop an engineered solution for the containment and isolation of residual contaminants and to render the property suitable for redevelopment as a Brownfields site.

Geosyntec conducted a feasibility study to evaluate alternatives for isolating residual contamination, specifically to prevent direct physical contact or indirect contact with the groundwater at the site, thereby eliminating future groundwater contamination from residual sources. Our analysis resulted in the selection of a 750-foot long, 50-foot deep slurry wall overlain by an engineered cap as the preferred solution. In order to develop the detailed design, Geosyntec conducted geotechnical and hydrogeologic site explorations, developed design criteria to achieve the desired containment, and evaluated the stability of the excavation and slurry wall as well as the structural integrity of the cover system for conditions anticipated during and after construction. In addition to performing all geotechnical and civil design, we provided construction management and quality assurance oversight for the project.

The glacial till stratigraphy in this part of Massachusetts, combined with the presence of many float boulders within the till, presented a challenging environment for trench excavation and installation of the slurry wall. We conducted a thorough geotechnical field investigation consisting of soil test borings to map the location of the nested boulders and establish contours of the bedrock. Additionally, we obtained soil samples at frequent intervals along the proposed alignment of the slurry wall and coordinated geotechnical laboratory testing to further characterize the subsurface soils into which the trenching activities would be performed. We obtained rock cores at auger refusal locations to identify the presence of boulders and to determine the Rock Quality Designation of the bedrock. This allowed for hydrologic evaluation of groundwater flow under the slurry wall. We also performed in situ slug tests to evaluate the hydraulic conductivity of the glacial till deposit for further prediction of the slurry wall performance. Our design activities then included:

Site grading plans to minimize potential issues with surface water runoff and infiltration, and to maximize future Brownfields redevelopment options for the site.

Construction of the vertical barrier and cap has effectively isolated residual contamination. The site cap and site layout will facilitate future commercial reuse of the site. The slurry wall and cap were constructed without any reportable health and safety incidents or disruption to traffic along Route 44. Ongoing performance monitoring is the final step before formal regulatory site closure under Massachusetts regulations.