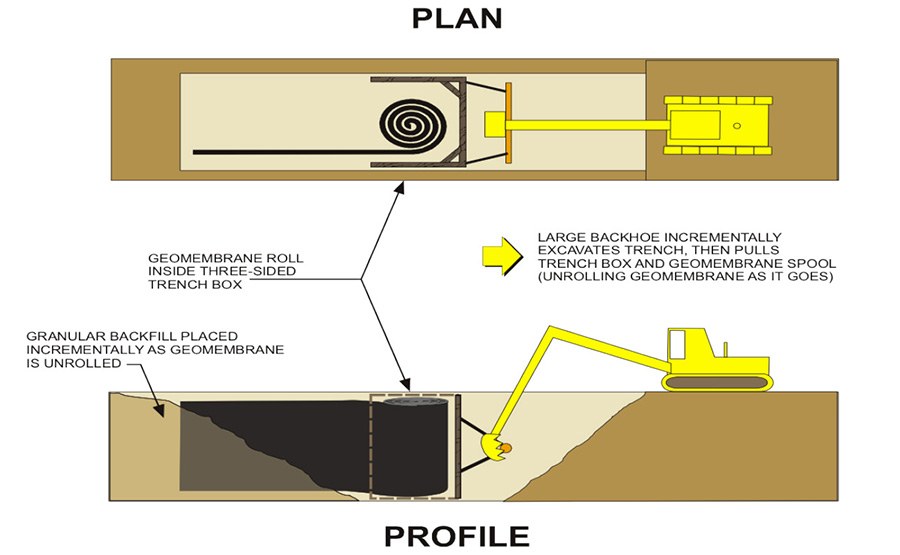 Groundwater at a site in central Maine had become contaminated from past activities at the site. In order to make the site suitable for future uses, the contaminated groundwater had to be isolated. To accomplish this effectively, a 2,500-foot long groundwater cutoff wall was needed. The original design prepared by others called for a conventional remedy involving driven steel sheet piles with joint sealant with a projected installed cost of $1.5 million. The client retained Geosyntec to design a more cost-effective solution that would meet the groundwater isolation objectives.

Geosyntec's approach was to use existing subsurface geotechnical data supplemented by several soil-test borings to establish an accurate depth for the bottom of the cutoff wall. Our analysis of the geotechnical data confirmed that the bottom of a cutoff wall could be embedded into a low-permeability subsurface clay layer that existed consistently at approximately 20 to 25 feet below the ground surface. Our barrier design used a suspended geomembrane curtain rather than driving sheet piles to isolate the impacted groundwater. We worked closely with the contractor to design and build a custom, three-sided trench box and spool that was used to deploy the geomembrane concurrently as the trench was being excavated. Soil bentonite was used to backfill the lower portion of the cutoff barrier which was embedded two feet into the subsurface clay layer. Granular backfill obtained from an on-site source was then placed on both sides of the geomembrane curtain until reaching the ground surface.

Geosyntec's design of a suspended geomembrane curtain cutoff wall as a replacement for the original sheet pile wall design resulted in significant cost savings to our client. The geomembrane curtain was installed at a construction cost of $450,000. When compared to the driven sheet piles cost, our innovative design and hands-on approach saved our client over $1.05 million, or 70%, compared to the original design. The client anticipates using this solution for an additional 1,800 feet of cutoff wall in the next two years, which is expected to save an additional $750,000 in construction costs.