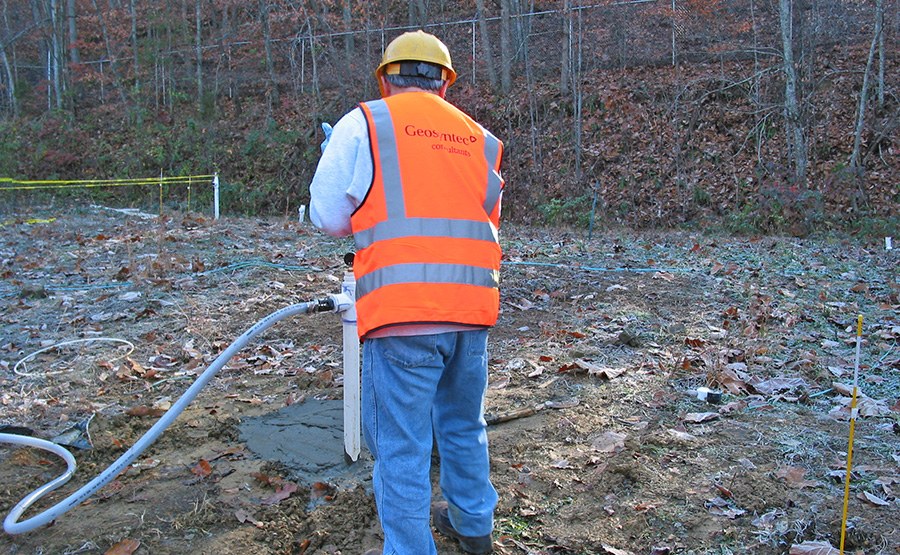 This 30-acre site was the former location of a disposal area burn pit where a wide variety of liquid and solid wastes generated from a nearby manufacturing facility were disposed and periodically burned off. A site investigation began in 1984 under an order issued by the Tennessee Department of Environment and Conservation (TDEC). Primary contaminants of concern at the site include halogenated solvents such as trichloroethylene (TCE), 1,1,1-TCA, and Freon 113. The TDEC issued a Record of Decision (ROD) in 1996 that specified multiple remedies, including soil vapor extraction (SVE), focused excavation, and soil flushing for soils in the burn pit area. The monitoring data collected after a SVE system had been in operation for five years suggested asymptotic performance. The client retained Geosyntec to design and implement a soil flushing pilot test for a comprehensive approach integrating the soil flushing remedy with the site's groundwater remediation program.

To develop a co-solvent soil flushing work plan, Geosyntec performed a two-part bench-scale treatability study. The study evaluated the effectiveness of ethyl lactate, at various strengths, in extracting target halogenated contaminants from the site soil, and explored the potential of stimulating reductive dehalogenation activities of both the indigenous populations and two different augmented cultures (KB-1 Plus and WBC-2) with ethyl lactate amendment. We also directed a hydraulic test, including percolation and injection tests, for evaluating the hydraulic characteristics of the soil in the target treatment area. These provided site-specific data required for the design of the soil flushing pilot test.

Results of the treatability test showed that ethyl lactate supported a combined co-solvent flushing/bioremediation approach. Ethyl lactate effectively mobilized sorbed target chlorinated VOCs from the site soil, with greater than 90% mass extraction rates observed in the test. Microcosm biodegradation tests showed that pre-treatment for Freon-113 was necessary for KB-1 Plus to achieve complete dechlorination of TCE to ethene, while WBC-2 was able to degrade cDCE to ethene in the presence of Freon-113, but not TCA. Geosyntec developed a pilot test work plan and prepared a UIC permit application in 2007. The work plan and the permit application received regulatory approval in their entirety within one month after the submittal. The field pilot test began in November 2007, and we completed the performance monitoring by the end of 2008.

Geosyntec's challenging project combined soil flushing with in situ bioremediation as a cost-effective source area remediation approach. As the field pilot test demonstrated, the project met our client's objective of developing and applying a comprehensive approach to integrating the soil flushing remedy with the on-site groundwater remediation program.