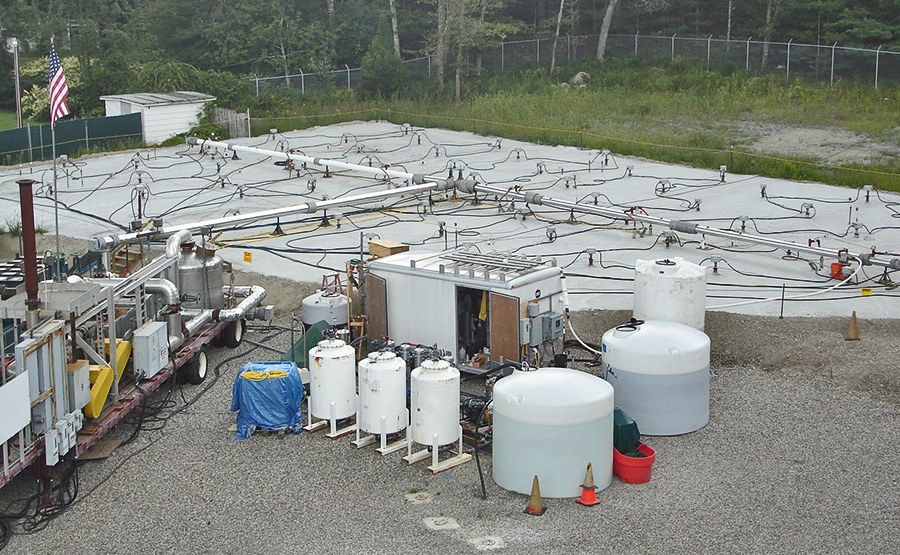 A portion of the privately owned "Route 44" property was excavated in the 1930s for fill for an off-site construction project. The resulting borrow pit was gradually filled with drums containing a variety of wastes. In the 1990s, the U.S. EPA conducted a series of site characterization studies, and in 2001, removed over 800 drums from the site. These removal activities were suspended after labels bearing the name of a nearby manufacturer were found on some of the drums. EPA then sent a Remedial Action letter to the corporate successor of that firm, who subsequently retained Geosyntec to provide oversight of the remaining drum removal activities, as well as to guide the site through the subsequent site assessment and remediation process and to ultimately achieve regulatory closure under the Massachusetts Contingency Plan (MCP).

In 2002, Geosyntec conducted site investigations including surficial soil sampling and soil borings in coordination with the removal of more than 1,300 drums and over 4,000 tons of contaminated soil and associated wastes by the client's contractor. Our groundwater investigations led to the evaluation of vapor intrusion at two nearby residences, and, ultimately, installation of vertical and horizontal passive vapor interception systems. We also determined that ongoing discharge of VOCs to a nearby stream led to the presence of VOCs in surface water in excess of 1000 micrograms per liter. In 2005, Geosyntec conducted a Feasibility Study (FS) to evaluate alternatives to address residual contamination at the Site. Contaminants of potential concern (COPCs) included chlorobenzenes, naphthalene, 1,1,2,2-tetrachloroethane, toluene, ethylbenzene, and xylene. Total concentrations of volatile organic compounds (VOCs) in the core of the groundwater plume emanating from the source area at the Site exceeded 125 milligrams per liter (mg/L or ppm), with individual COPC concentrations well in excess of state regulatory limits. Geosyntec's FS determined that in situ thermal desorption (ISTD) was the preferred remedial technology due to the distribution and unique mixture of site contaminants.

ISTD, provided through a subcontractor, is a proprietary technology that employs conductive heating of the subsurface with "heater wells" in order to volatilize and pyrolize volatile and semi-volatile organic contaminants. Vapors containing the volatilized and degraded contaminants are removed from the subsurface, along with water vapor, and are then further treated via thermal oxidation before discharge to the atmosphere.

Geosyntec field staff assisted our subcontractor with the construction and wiring of 70 heater wells. Geosyntec also designed, constructed and is currently operating a multi-phase groundwater extraction and treatment system along the downgradient edge of the thermal treatment zone to capture impacted groundwater leaving the source area. The treatment system components include flocculation and settling tanks to remove iron and manganese, granular activated carbon to remove dissolved-phase VOCs, and an ion exchange resin to remove trace concentrations of heavy metals. The treated groundwater is then reintroduced downgradient of the treatment zone through an infiltration trench.

The ISTD technology that Geosyntec and its subcontractor have employed at the Route 44 Site destroyed an estimated 17 to 21 tons of contaminants after only one year of operation, while meeting the required discharge limits for off-gasses and treated groundwater. This phase of the remediation program has concluded and monitoring activities are currently underway to assess the potential for regulatory closure under the MCP.