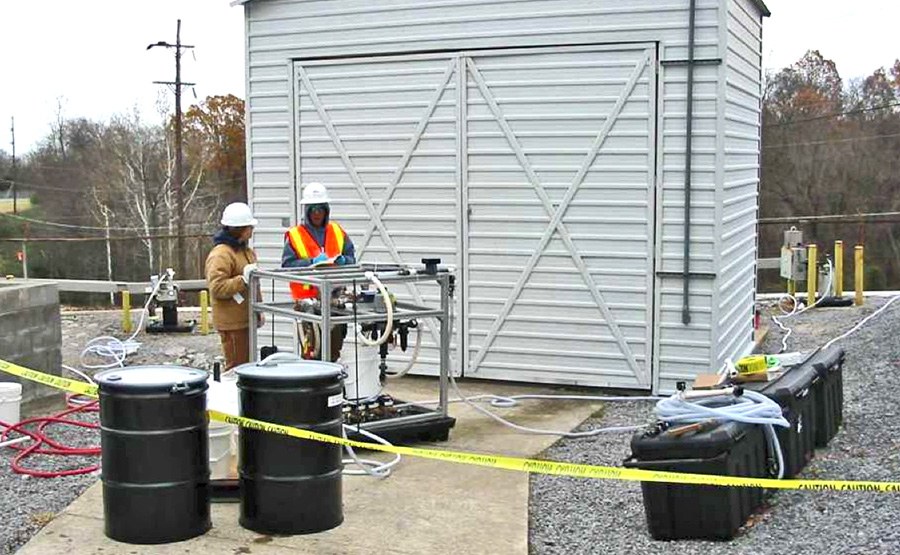 Bioremediation in Overburden and Bedrock to Address Chlorinated Solvents
« All Projects

An accidental release of TCE decades ago contaminated overburden and bedrock at this manufacturing plant. Remediation did not occur until contamination was discovered during an investigation performed as part of a property transaction. Upon this discovery, a pump and treat system was installed by another firm in the suspected source area. This system operated for about a decade, and removed approximately one pint of TCE annually with reported O&M costs of $80,000 per year. Despite groundwater pumping, TCE migrated into the bedrock, moved downgradient and then off-site. TCE and its daughter products eventually began discharging into a stream located on a neighboring property. These seeps have impacted water quality in the stream and threatened to impact water quality in the lake into which the stream discharges.
Geosyntec was asked by the client to assist the incumbent consultant in implementing bioremediation in the source area and install a barrier (biobarrier) in bedrock at the property boundary to prevent off-site migration of VOCs.

Our client, who was anxious to implement a remedy within months, invited Geosyntec to visit the site and discuss the feasibility and potential approach for a bioremediation remedy. Geosyntec subsequently recommended implementing bioremediation in two phases. Phase I would involve bioremediation at the source area and one downgradient well to assess its feasibility at the site. Phase II would be implemented contingent upon the success of Phase I, and would involve the installation of a biobarrier in the bedrock across the breadth of the dissolved-phase plume.

Two months after becoming involved in the project, Geosyntec began Phase I, which involved injecting an emulsified edible oil (EEO) into wells of the former pump and treat system located near the source of contamination, as well as into one bedrock well near the property boundary. During this phase, we also assessed the potential for the transport of EEO, KB-1 (a naturally-occurring bacteria capable of degrading chlorinated solvents) and/or TCE-daughter products beyond the treatment zone and into the stream. Subsequent sampling revealed that TCE concentrations at all of the source area treatment wells were reduced from pre-bioremediation concentrations between 2500 and 9000 ppb to 50 ppb or lower, and that biodegradation products (cDCE, vinyl chloride and non-toxic ethene) were being produced at all treatment wells. These data proved the technology's success. Also, KB-1, EEO, and intermediate products of TCE biodegradation were not migrating far enough from injection points to impact surface water.

Based on the success of Phase I, Geosyntec installed a 450-ft. biobarrier across the downgradient plume in June 2007. Results from wells downgradient of the biobarrier indicate that the bioremediation is successfully treating TCE and TCE-daughter products in bedrock; in most locations VOCs concentrations are below drinking water concentrations.

Geosyntec successfully demonstrated that bioremediation is a feasible approach for TCE remediation in overburden and bedrock at this site, resulting in the approval of a full-scale biobarrier as the long-term remedy to prevent off-site migration of VOCs. The total concentration of chlorinated VOCs (i.e., TCE, cis-DCE and vinyl chloride) has decreased approximately 85% in the source area and more than 95% in the downgradient plume. The Client has recognized this project as a hallmark example of cost-effective and rapid groundwater remediation and the accomplishments are routinely presented during internal corporate meetings. The cost for implementing Phase I was about the same as one year of O&M for the former pump and treat system, yet bioremediation removed more contaminant mass in the first year than the pump and treat system had removed in the previous decade. On-going annual O&M costs for bioremediation in the source area and biobarrier are estimated at less than 30% of the annual O&M cost for the former pump and treat system.