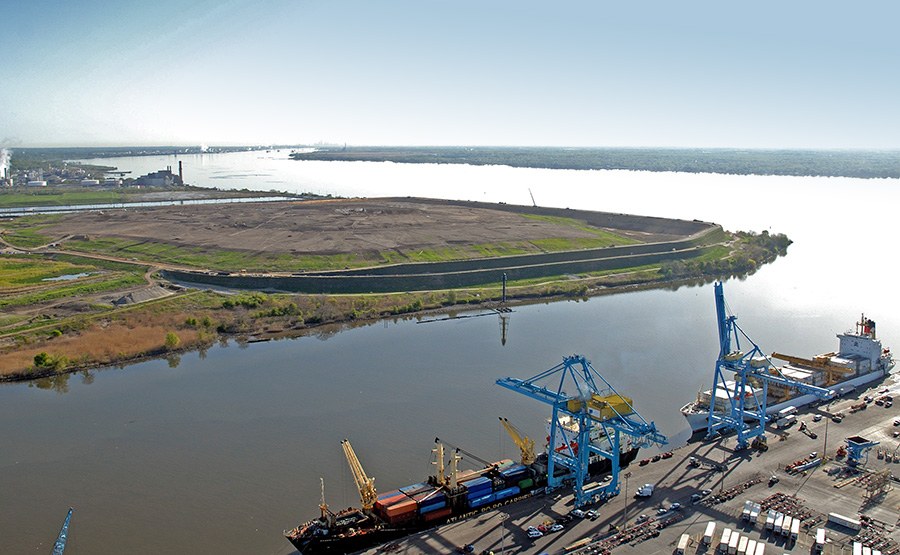 The Cherry Island Landfill (CIL) is located in Wilmington, New Castle County, Delaware at the confluence of the Delaware and Christina Rivers. The Delaware Solid Waste Authority owns and operates the facility to serve the residential and commercial customers in the County. To meet the growing demands for MSW disposal space, DSWA established the goal of extending the life of the site by creating additional airspace on top of the existing landfill footprint - if constructability issues could be resolved. The existing landfill was initially constructed in 1985 over an area that was partly reclaimed from the Delaware River, and was used for many years as a dredged material disposal site for the U.S. Army Corps of Engineers. As a result, the subsurface characteristics at the CIL site consist of very soft and extremely compressible materials. Previous stability analysis indicated that the capacity of the landfill for vertical expansion was limited and, based on the incoming waste stream, the site would reach its capacity in 2006. DSWA's goal was to develop a cost-effective design that could overcome the stability issues associated with the subsurface materials and allow a major facility expansion.

Geosyntec used as its performance baseline a 2001 conceptual design developed by others that incorporated a soil mixing process to enhance subsurface stability at a construction cost estimate of $180 million. Working with a world-class technical expert panel, Geosyntec evaluated several alternatives and selected a foundation improvement technique that used prefabricated vertical drains (PVDs) combined with a mechanically stabilized earth (MSE) berm. The MSE berm plays a dual role, compressing and consolidating foundation soils while providing new disposal space. The PVDs drain water from the dredged material/alluvium to an underlying sand deposit, thus allowing the dredge/alluvial soils to dissipate excess pore water pressures. We recognized that spacing of the PVDs controls the rate of pore water pressure dissipation (which in turn determines the speed of MSE berm construction and vertical expansion waste placement), and that horizontal extent of PVDs controls the global stability of the landfill. To optimize PVD placement, our team developed a project-specific pore pressure dissipation model that was unique because it combined state-of-the-art knowledge of pore pressure generation during shear, together with site-specific laboratory data. To confirm the model results for this unique design, we implemented a pilot test program to evaluate the actual pore pressure dissipation rates for different PVD spacing. The results of the pilot test program allowed us to optimize the spacing of the PVDs, reducing the cost of PVD installation by approximately 36% from our initial estimate.

We designed an MSE that is 60 feet high, almost two miles in length, and consists of two million cubic yards of fill. When completed, it will be one of the highest and most massive reinforced structures constructed over soft soils built in the United States. An extensive geotechnical monitoring network is in place to monitor the stability of the berm as it is built. Stormwater management and leachate collection features also require innovative construction techniques to accommodate the large expected settlements of the MSE berm - up to 14 feet. The expansion will provide 19 years of additional disposal life for our client.

Following successful permitting, the actual construction bid for Geosyntec's design in 2006 was $86 million ($11 million of which was for the innovative foundation improvement, almost $160 million less than the estimated cost for the 2001 original conceptual design). Construction began in the fall of 2006 and will be completed in March 2011. During construction of the MSE berm, geotechnical data verified that the berm behaved as predicted by finite element modeling performed during design. Detailed interaction between Geosyntec's field CQA and engineering personnel has provided timely geotechnical review of monitoring data, allowing MSE berm construction to continue without disruption. In addition, the completion of the project has provided our client with completely new leachate, landfill gas, electrical, and SCADA systems for the site. As a result of the strength of Geosyntec's design combined with proactive construction services, the final cost for the completed project will be within two percent of the original contract amount.