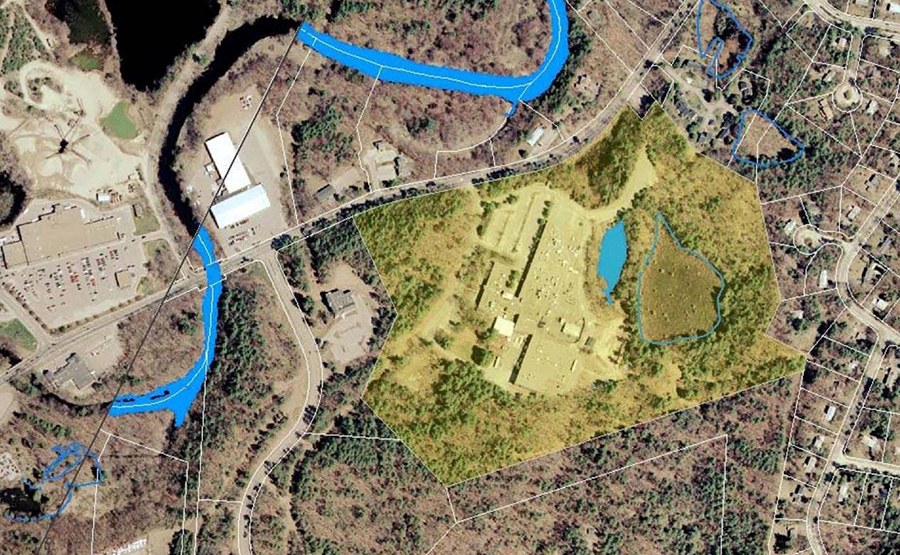 Nuclear Metals, Inc. (NMI) used depleted uranium (DU) in the manufacture of penetrators for the US Army. From 1958 to 1985, process waste (DU, nitric acid, and lime) was disposed in an unlined holding basin at this Boston-area manufacturing facility now surrounded by residential neighborhoods. As a result, DU was released to soils and groundwater near the basin.

NMI removed 8,000 cubic yards of sludge and soils from the holding basin in 1998 as part of its response actions under Massachusetts regulations, leaving behind residual soil contamination and a small but concentrated plume of uranium in groundwater. A high level of local concern about the site has developed since the early 1990s, leading to its listing on the National Priorities List, or Superfund, in 2001. The current Potentially Responsible Parties, acting through a site management contractor, selected Geosyntec to achieve the following objectives: 1) ensure compliance with an existing Remedial Investigation/Feasibility Study (RI/FS) order for the Site, 2) build credibility with the local community based on technical expertise and stakeholder involvement, and 3) advocate for a low impact, cost effective remedy for uranium in groundwater.

Geosyntec initially provided co-authorship, technical oversight and review of RI/FS work plans, and now manages the hydrogeologic aspects of the RI/FS as part of a multi-disciplinary project team. Scientific advances in understanding the fate and transport of uranium in the subsurface are evolving rapidly, and Geosyntec has been incorporating these advances into our approach for the RI/FS. Geosyntec developed a geochemical model and a conceptual transport model for the Site, which, among other things, has allowed us to include Monitored Natural Attenuation (MNA) as a potentially viable remedy in the FS. If accepted, an MNA remedy would avoid millions of dollars in remedy design and implementation costs.

As part of this work, we have established relationships with researchers at Stanford University and Dartmouth College to make critical measurements in their laboratories and provide peer review of Geosyntec's contaminant fate and transport modeling. Relevant analysis and data collection are being pursued upfront during the RI, avoiding potentially redundant and costly sampling events that could delay the FS, and laying the foundation for remedy acceptance by stakeholders and the U.S. EPA.

Geosyntec also maintains a database and Geographic Information System (GIS) for the project, and created a website for public outreach (www.nmisite.org). This work has satisfied public concerns about the extent of elevated DU concentrations and avoided the need for more extensive investigations at the Site.

Geosyntec continues to work closely with the client to adapt and focus the RI to support accelerated remedial alternatives development and screening as we progress towards the FS, ensuring that the RI provides the highest value to the PRPs and other stakeholders.

Geosyntec rapidly developed a high level of credibility with intimately involved stakeholders on this project. We are applying investigation and analysis techniques that foreshadow U.S. EPA guidance and will set a standard for the evaluation of uranium transport at other sites throughout the country. This approach has the best chance of achieving a logical and cost-effective outcome for this Site, including the potential for using natural attenuation to address remaining metals contamination in groundwater at a significant cost savings over more active approaches.

Development of the geochemical and transport models will also facilitate the evaluation of a number of other innovative and cost effective engineered remedies, such as in situ bioreduction, chemical stabilization and permeable reactive barriers.