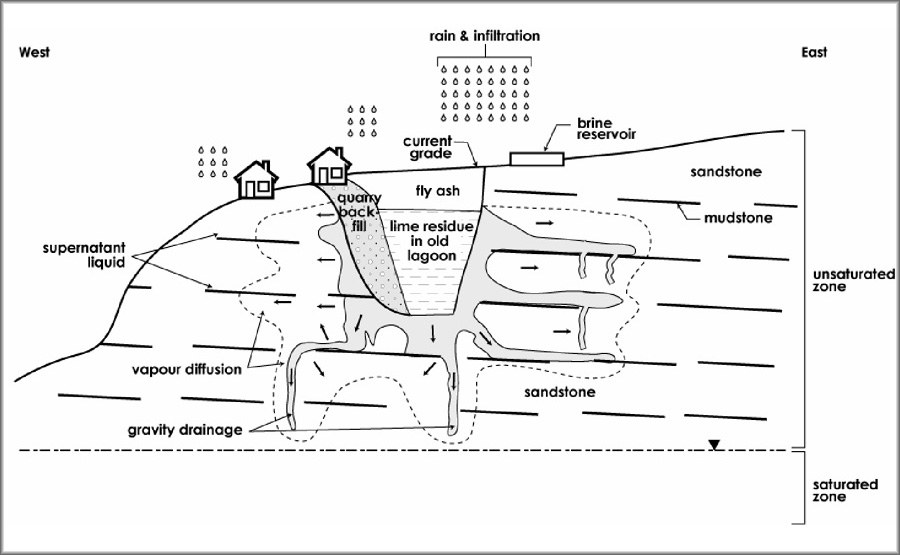 A former chemical manufacturing plant in the United Kingdom was scheduled for closure in the mid-1990s, and a team of environmental managers established a program for identifying and mitigating any potentially unacceptable risks to human health and the environment associated with the facility's 160 years of operation. During an initial screening of potential exposure pathways, subsurface vapor intrusion was identified as a possible concern. Residential properties are present in very close proximity to two former sandstone quarries that had been filled with waste materials and lime slurry from former chlorinated solvent production processes.

Environmental specialists now with Geosyntec were retained in 1997 to provide technical direction, data management, and reporting services for the largest vapor intrusion investigation undertaken at the time. The study consisted of preliminary mathematical modeling, installation of several phases of vapor monitoring wells, multiple rounds of subsurface vapor sampling and analysis for volatile organic compounds and chlorinated butadienes, four rounds of outdoor and indoor air sampling of 145 properties with all samples in duplicate. The investigation generated a very large dataset including more than 2,000 indoor air samples, more than 300 outdoor air samples, and more than 400 subsurface gas samples.

Geosyntec was retained to conduct detailed studies to characterize indoor air ventilation properties associated with adjacent residences, subsurface gas permeabilities, geologic material properties, the influence of weather conditions on subsurface and indoor concentrations, and spatial, temporal and laboratory variability. Geosyntec included in these analyses a complete data management system that incorporated geographic information system technology that allowed our clients, regulators, and other stakeholders to visualize the nature and extend of subsurface conditions for the first time. Geosyntec prepared the technical arguments to identify and demonstrate the subsurface vapor fate and transport processes, specified and managed the collection of the data to support the evaluation, presented the study results and interpretations to the regulatory agencies, and documented the study in a comprehensive risk assessment report.

Geosyntec demonstrated that vapor intrusion is limited to a small fraction of the properties, mostly located immediately adjacent to the former waste disposal areas and constructed on highly permeable backfill materials over formerly quarried land. The Triassic sandstone bedrock was shown to impose significant resistance to vertical vapor migration because of the tendency for infiltrating water to be retained at fine-grained layers, which act as vapor barriers.

This site has become leading reference site for subsurface vapor intrusion analyses not only in Europe but also North America. Geosyntec's work along with that of our project colleagues (industry, leading universities, and specialty consultants) has been widely distributed among regulators and policy makers as representing the state-of-the-practice and a benchmark in subsurface vapor intrusion data collection, assessment, and analysis.