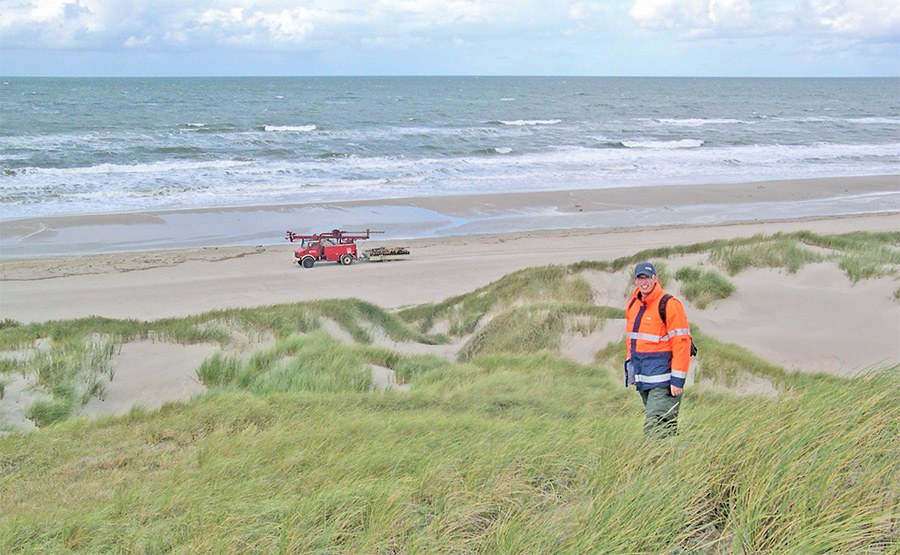 Kargard Plantage is one of the most widely discussed contaminated sites in Denmark, and is often referred to as a "super site" because of the scale of the potential liabilities and breadth of wastes disposed at this shoreline location. The site is a rugged dune field on the western coast of Denmark, bordering the North Sea. From 1956 to 1973, a pharmaceutical manufacturing facility, with regulatory approval, discharged 7.5 million gallons of wastewater containing approximately 60,000 metric tons of various salts, sulfa drugs, barbiturates, and organic solvents to pits situated on a plantation approximately 400 meters from the beach. Today, waste constituents in groundwater at the site discharge to the ocean at an estimated rate of 50 metric tons/year. Unpleasant odors at the site have been a problem since 1962, prompting regulatory authorities to close a 1000-meter section of the beach. Due to the scale and complexity of the potential human health and ecological impacts, as well as the lack of scientific data on how to remediate sulfa drugs and barbiturates in groundwater, our client's goals were to identify feasible remediation technologies and to confirm the applicability of these technologies through bench- and pilot-scale treatability testing.

A European-led team of consultants that included Geosyntec conducted a feasibility study (FS) to identify and evaluate viable remediation treatment technologies for the site. Geosyntec's charge was to develop a strategic approach to the FS for the team that would receive Danish Environmental Protection Agency approval. Geosyntec elected to rely upon its extensive experience on CERCLA-regulated sites in the United States and base the FS strategy on the well-documented CERCLA protocol to ensure that regulators, potentially responsible parties, and other involved stakeholders had a clear understanding of the path forward. The complexity and variety of contaminants (e.g., sulfonamides, barbiturates, chlorinated solvents, alcohols, fuel hydrocarbons, lithium, and chlorophenols), some of which had not previously been seen as groundwater contaminants individually or in combination with more common contaminants, drove the investigation of viable treatment options. For plume remediation, the FS identified sequenced aerobic/anaerobic bioremediation, in situ chemical oxidation with permanganate, and pump-and-treat with advanced oxidation as potentially effective remedies. For source area remediation, in situ chemical oxidation with Fenton's reagent, anaerobic bioremediation, and in situ flushing were identified as potentially effective remedies. The FS report recommended completion of extensive field investigation and treatability studies to support final remedy selection. The client adopted all of the recommendations from the FS report. Geosyntec designed and implemented a comprehensive treatability study that tested the performance of six remediation technologies: aerobic bioremediation, anaerobic bioremediation, chemical reduction via nanoscale zero valent iron (nZVI), Fenton's reagent, permanganate, and advanced oxidation processes (AOP) involving hydrogen peroxide and ozone. The bioremediation, nZVI, and permanganate treatability tests were conducted at Geosyntec's laboratory while testing of Fenton's reagent and AOP were conducted concurrently at third-party facilities. The treatability tests demonstrated that the unique suite of contaminants at the site is effectively treated by Fenton's reagent and AOP. Permanganate effectively treated sulfonamides and SVOCs as well, but achieved only partial degradation of most barbiturates. In addition, the groundwater toxicity was reduced substantially by the permanganate and Fenton's reagent applications.

Geosyntec provided a systematic and successful approach for identifying effective remediation technologies for a site contaminated with high concentrations of mixed manufacturing and process wastes. Geosyntec's team completed a five-week FS evaluation of one of the most contaminated waste disposal sites in Scandinavia in order to provide our clients with the scientific, defensible data they needed to pursue an effective remediation strategy for the site. As a result, our client has two viable treatment technologies (Fenton's reagent and permanganate) to test in the field that have the greatest chances of remediating this highly contaminated portion of the Danish shoreline. Our treatability tests also provided an advancement of the state-of-the-science, as these studies have already discovered new treatment mechanisms for sulfonamides that have not been reported, as yet, in the academic literature.