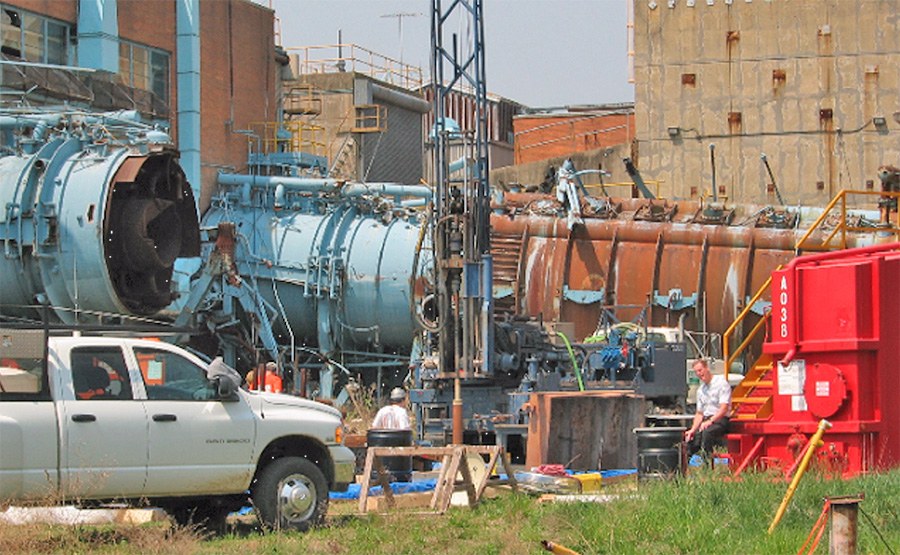 The Naval Air Warfare Center (NAWC) in West Trenton, New Jersey, was used as a jet engine testing facility from the mid 1950s to the late 1990s. The facility routinely used large quantities of chlorinated solvents, primarily trichloroethene (TCE), as cooling and heat transfer fluids. Operations at the site resulted in the release of an estimated 100,000 gallons of TCE to the environment. The concentration of TCE in groundwater at the site has been measured at concentrations up to 200 parts per million (ppm). The initial remediation response by others involved the installation of a pumping and treatment (P&T) system for groundwater (1993). While the system has removed a substantial mass of contaminants, after ten years of operation, concentrations of TCE in groundwater had not decreased. The Navy asked Geosyntec to develop an approach that would accelerate contaminant mass reduction in the subsurface, thus reducing the length of time that the P&T system would operate.

In developing its plan to accelerate mass reduction, Geosyntec was fortunate to have access to the extensive body of data amassed by the U.S. Geological Survey (USGS) on this site. USGS, as part of its own research program, had used the NAWC site as a fractured bedrock study area for a number of years. USGS had documented the complicated geology of the site which includes two major formations of the Newark Basin with a thrust fault present near the contact between the two formations. Using the USGS data, Geosyntec remediation specialists were able to identify contaminated zones and hydraulic connections between existing monitoring wells as part of their approach to reduce the contaminant mass through bioaugmentation. Geosyntec has pioneered the development of bioaugmentation technology using naturally-occurring bacterial cultures containing Dehalococcoides sp. (Dhc), a known TCE-degrading consortium. The injection of the culture, along with suitable electron donor substrates, has been performed successfully at a number of sites in unconsolidated materials.

Geosyntec selected two hydraulically-connected monitoring well pairs to for a bioaugmentation field treatability study. In order to distribute the selected substrate (emulsified soybean oil (ESO) and the TCE-degrading culture, KB-1 ), Geosyntec elected to use the well pairs for the injections. Extracted water from one well was dosed with the injection materials and injected into its paired well within the test plot area. The plot was approximately 9,000 square feet with wells up to 115 feet deep and concentrations of TCE up to 16 ppm. Our approach also included using one of the wells to demonstrate that the substrate could be injected into low permeability zones. An inflatable packer was used to isolate the open injection interval and the subsequent injections were performed through the packer, allowing injections to be performed under pressure. Our test plot was the first application of bioaugmentation in fractured rock using an active injection system and the first to use pressure injection for bioaugmentation using a inflatable packer.

Under the regulatory auspices of the New Jersey Department of Environmental Protection, we monitored TCE degradation in the groundwater for approximately one year after injection. Concentrations of TCE dropped dramatically following injection, generally reaching detection limits (less that 1 ppb) within six weeks. Our environmental scientists monitored the transient production of degradation products (1,2-cis-dichloroethene, vinyl chloride, and ethene). Detection limit concentrations of the degradation products were achieved within seven months and no rebound of the TCE concentration has been observed.

TCE concentrations observed in groundwater wells approaching 16,000 parts per billion (ppb) have been reduced in the test plot area to less than 1 ppb in less than one year. The wells in the test plot are compliant with NJDEP groundwater quality standards for the first time in decades. The results have been so promising that the USGS and Geosyntec have been awarded a research grant by the Strategic Environment Research and Development Program (SERDP) to further study the mechanisms involved in bacterial transport in this geology.