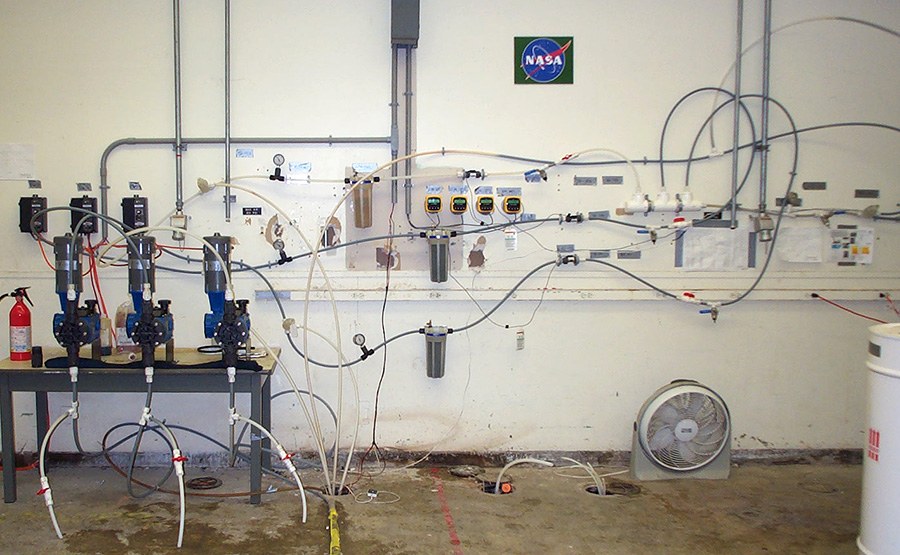 NASA has always been on the leading edge of technology development and application - not only in space exploration, but also in the areas of environmental compliance and resource stewardship. To that end, NASA is a leading proponent of field testing new and innovative technologies that will benefit their own site restoration program, as well as contributing to the wider application of cost-effective remedies for impacted environments. A common contaminant issue at NASA sites, as at other facilities where industrial solvents have been used, is the presence of trichloroethene (TCE) in groundwater.

In the 1960s, Launch Complex 34 (LC-34) at the Kennedy Space Center in Florida was an active launch site for the Apollo program. As a result of TCE releases to groundwater during that period, TCE is now found in the sandy aquifer underlying the site in the form of a dense, non-aqueous phase liquid (DNAPL). NASA, through its Small Business Innovation Research initiative, selected Geosyntec to develop and implement a field testing program of bioaugmentation technologies to target TCE DNAPL in groundwater using LC-34 as the demonstration site with the goal of documenting and reporting the efficacy of this remediation technology to the scientific and engineering community. As part of this program, Geosyntec collaborated with the U.S. EPA Superfund Innovative Technology Evaluation (SITE) program, which collected independent data to validate the bioaugmentation performance.

Geosyntec's approach to this assignment employed an innovative application of an emerging bioremediation technology. Although anaerobic reductive dechlorination is a well-understood degradation mechanism for TCE and less-chlorinated ethenes (e.g., 1,2-cis-dichloroethene and vinyl chloride), the technology is typically used to treat groundwater with only dissolved concentrations of these chemicals. The technology has not traditionally been used in source areas since it was generally believed that the high TCE concentrations in source areas were inhibitory to dechlorinating microorganisms. Based on the encouraging results of carefully controlled laboratory studies, Geosyntec applied enhanced bioremediation and bioaugmentation, an innovative bioremediation technology pioneered by Geosyntec and the University of Toronto, to accelerate TCE mass removal from the DNAPL source area at LC-34. Groundwater at the site was amended with dilute ethanol (to promote microbial growth) and bioaugmented with KB-1 , a naturally-occurring, dechlorinating microbial consortium which is known to contain at least two distinct strains of Dehalococcoides microorganisms and has been previously demonstrated to promote rapid and complete TCE dechlorination to ethene.

Bioaugmentation rapidly increased the rate of TCE biodegradation with ethene concentrations in stoichiometric excess of the initial TCE concentrations, indicating that biodegradation enhanced the removal of TCE mass and confirming that dechlorinating activity is not inhibited by the high TCE concentrations found in the source area. Additional sampling conducted two years after this study confirmed that dechlorinating activity continued in the absence of ongoing treatment and resulted in further decreases in TCE concentrations, demonstrating that bioaugmentation is an effective approach for both enhanced DNAPL removal and/or biocontainment of TCE-impacted groundwater in DNAPL source zones. As a result, NASA has deployed bioaugmentation technologies at several Kennedy Space Center sites and related facilities. In addition to the independently-prepared SITE Technology Evaluation Report (Demonstration of Biodegradation of Dense, Nonaqueous-Phase Liquids (DNAPL) through Biostimulation and Bioaugmentation at Launch Complex 34 in Cape Canaveral Air Force Station, U.S. Environmental Protection Agency , National Risk Management Research Laboratory, Superfund Innovative Technology Evaluation Program, 30 September 2004), the results of this study are being widely disseminated to the scientific and engineering communities through reports and presentations by Geosyntec and NASA at multiple conferences. The project was featured at the intensive case study forum held by the Interstate Technology & Regulatory Council BioDNAPL Team in March 2006.