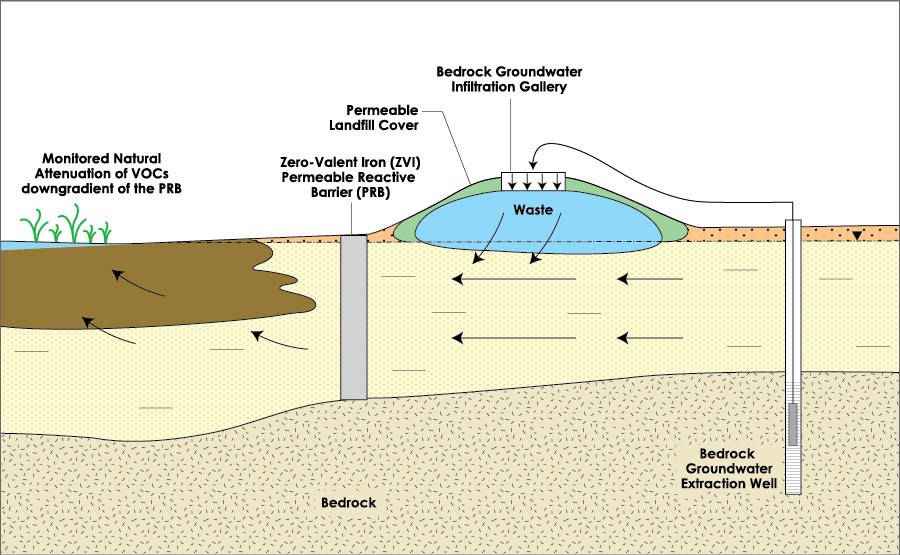 The City of Somersworth, New Hampshire, operated a disposal site on a 26-acre property from the mid-1930s until 1981. Originally, the City burned residential, commercial, and industrial wastes at the site. In 1958, the dump was converted to a landfill. While it was in operation, unknown quantities of sludges, solvents, acids, dyes, metals, laboratory or pharmaceutical wastes, and potash were disposed of at the site. The Somersworth Landfill Superfund Site Group (the Group), formed to address the residual contamination issues at the site, was faced with a U.S. EPA-recommended traditional presumptive pump and treat (P&T)/waste encapsulation remedy valued at more than $16 million (capital cost). The Group elected to investigate alternatives to the traditional/presumptive remedy that would attain risk and regulatory compliance objectives as outlined in the Record of Decision (ROD) while achieving a material reduction in total project cost.

Initially, personnel currently with Geosyntec analyzed the site investigation data to develop a set of technologically advanced options to meet the risk, regulatory, and cost objectives of the Group. This team was instrumental in preparing the case for a remedy that included the design and installation of a permeable reactive barrier (PRB) incorporating zero-valent iron (ZVI) as a groundwater treatment agent coupled with a permeable cover for the landfill to encourage contaminant flushing. All of these remedy elements were thoroughly evaluated through the preparation of an addendum to an original Feasibility Study prepared by others. Based on the team's technical advocacy, U.S. EPA accepted the remedy which included an in situ ZVI PRB, a permeable cover system, natural attenuation for VOCs downgradient of the landfill, and a bedrock groundwater extraction system. The remedy, as described in the site's ROD, provides for treatment of the source by allowing water infiltrating through the permeable cover to flush chemicals from the landfill. These chemicals are then treated in the downgradient ZVI PRB. Because of the innovative nature of the remedy components, U.S. EPA required that the ROD also include a contingent remedy consisting of a RCRA-type cover system, a downgradient soil-bentonite barrier, and a groundwater P&T system.

The Group selected Geosyntec to design the innovative technology remedy and provide construction quality assurance services during its implementation. At the time of its construction commencement in 2000, the ZVI PRB at this site was:

Working hand-in-hand with the Somersworth Group, we achieved:

Regulatory Compliance: The key to regulatory compliance for the site began with the vigorous pre-ROD technical advocacy for a remedy that could achieve performance equivalency with the traditional, presumptive remedy proposed by U.S. EPA. As reported in U.S. EPA's Five-Year Review of remedy performance (September 2005), the remedy is compliant with the ROD and continues to provide protection from contact exposure and impacted groundwater.

Total Project Cost Reduction: Geosyntec's remedy saved the Group $5.5 million in capital costs and an estimated $1.3 million in reduced O&M costs when compared to the construction estimate for an upgradient groundwater diversion trench, a soil-bentonite slurry wall surrounding the entire landfill, and a P&T system. In addition, the construction of a $10.5 million RCRA cover for the landfill has been deferred until after cleanup levels have achieved (15 to 25 years hence). If U.S. EPA agrees that the operation of the PRB and permeable cover fully satisfy the ROD requirements in the future, the Group may avoid the cost of installing the RCRA-type cover, upgradient groundwater diversion trench, surrounding slurry wall, and groundwater P&T system entirely.