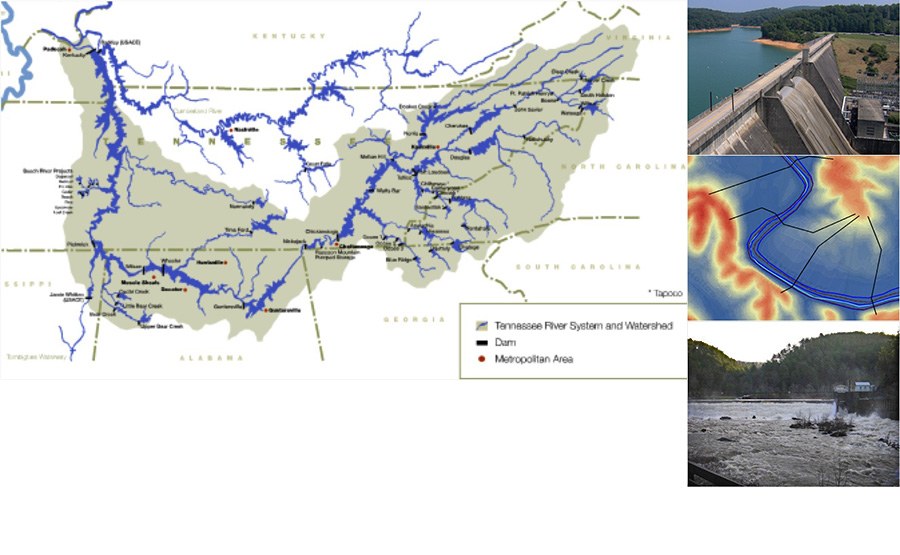 Tennessee Valley Authority (TVA) River Operations regulates a system of 49 reservoirs spanning seven states and maintains Emergency Action Plans (EAPs) for dams throughout the Tennessee River system. The current floodplain maps are based on older models, assumptions, and floodplain mapping techniques from the 1980s. TVA is updating the flood mapping component of their EAPs through simulation of probable maximum floods (PMFs) and postulated failure of 10 main-stem reservoirs and 28 tributary reservoirs. Information describing the hydrology and hydraulics of the Tennessee River watershed was integrated into the current hydrodynamic model.

Various HEC-2, HEC-RAS, and ADYN models had been developed for many of the tributary reaches, and additional bathymetry was available from other data collection and modeling efforts. Data gaps of the existing TVA system geometry were identified requiring bathymetric cross-sections to be surveyed in reaches of several tributaries. Geosyntec collected bathymetry data utilizing acoustic Doppler profilers and RTK-GPS technology; this data was integrated with the TVA DEM in overbank areas to be incorporated in integrated geo-referenced HEC-RAS geometry.

To facilitate the flood extent mapping, existing model geometry that did not have spatial attributes was geo-referenced utilizing ArcGIS and HEC-GeoRAS. TVA developed updated inflow time series for each of the PMF scenarios and sunny day flow conditions for all sub-basins. Model geometry was extended for overbank regions by extending cross-sections that were not sufficiently wide to contain flows from modeled scenarios by integrating with seamless TVA 10-m2 DEM. Available storage was analyzed in each of the selected tributary reservoirs; and lateral storage was integrated in model to be consistent with previously developed storage-elevation curves.

As defined by TVA, operational rule sets, structure rules, and failure geometries were incorporated into models. Model runs were performed for each of the scenarios, and initial geometry, parameterization, and computation settings were adjusted to achieve stable model results.

Our effort resulted in a single, geo-referenced HEC-RAS model of the TVA river system, including remote areas where data had not previously been acquired. Model results were documented to be incorporated into the final TVA EAP flood inundation maps. Hydraulic model development in this project will facilitate future development of an operational hydraulic model for use over the full range of flows for river management.