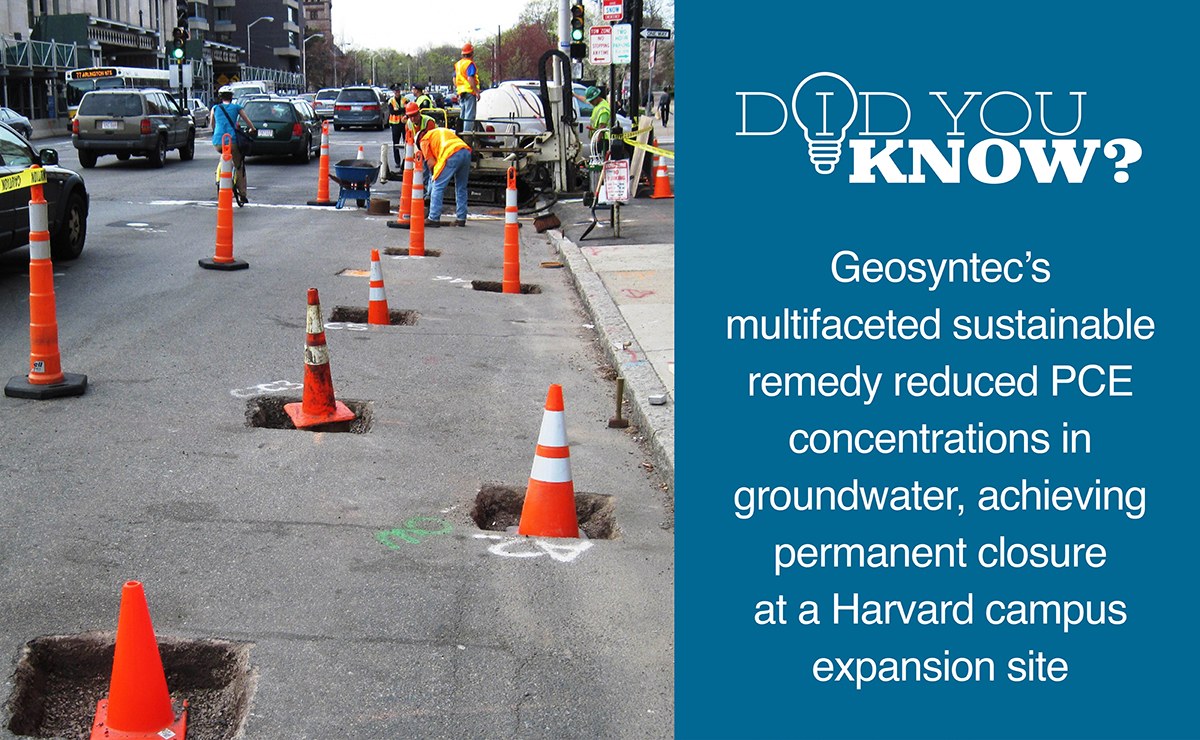 Remediation for a Campus Expansion at Harvard University
« All Projects

As part of a campus expansion, Harvard University purchased an adjoining commercial property that had housed a corner dry cleaner for decades. Historical releases of tetrachloroethene (PCE) from the drycleaner to shallow soil and groundwater had occurred in an area of dense population and complex urban infrastructure. Harvard tasked Geosyntec with designing a remedy for PCE contamination in groundwater and soil. The design had to achieve regulatory closure under the Massachusetts Contingency Plan (MCP) and incorporate green and sustainable design principles without significant interruption of campus activities.

Bioremediation is an effective and sustainable technology that requires substantially less energy, labor, and expense to implement and monitor than many traditional technologies for addressing chlorinated solvents. Geosyntec designed, installed, and operated a groundwater pump-and-treat system as a focused component of the remedy to hydraulically control the plume from advancing around a newly constructed subsurface structure. Available space and access issues spurred creativity; Geosyntec designed the system to fit into a parking spot in an underground garage. Of many innovations included in the remedy, two notable examples included subletting a basement apartment off-site to install a bioremediation pilot test, and using the original 140-year old cracked sewer lateral from the drycleaner to add bioremediation amendments to the main PCE source area. Both steps avoided expensive and disruptive street occupation, which reduced the overall health and safety risks of the work while improving efficiency and effectiveness.

Geosyntec implemented a multifaceted remedy that reduced PCE concentrations in groundwater by many orders of magnitude, which exceeded the client's remedial goals, while minimizing impacts to campus operations, students, faculty, staff, and nearby residents. Geosyntec provided a vision for site remediation and direction to the multiconsultant project team. Careful planning and technical insight saved the client life-of-project labor costs by improving coordination among stakeholders and by lobbying regulators to eliminate unnecessary treatment system components and justify reductions in sampling frequency, and by developing an innovative in situ solution to treat nitrate in groundwater.  Geosyntec used the cost forecasting models to recommend changes to monitoring and staffing plans that saved a significant portion of Geosyntec's total fee for service. In early 2019, the site achieved permanent closure without a need for deed restrictions.