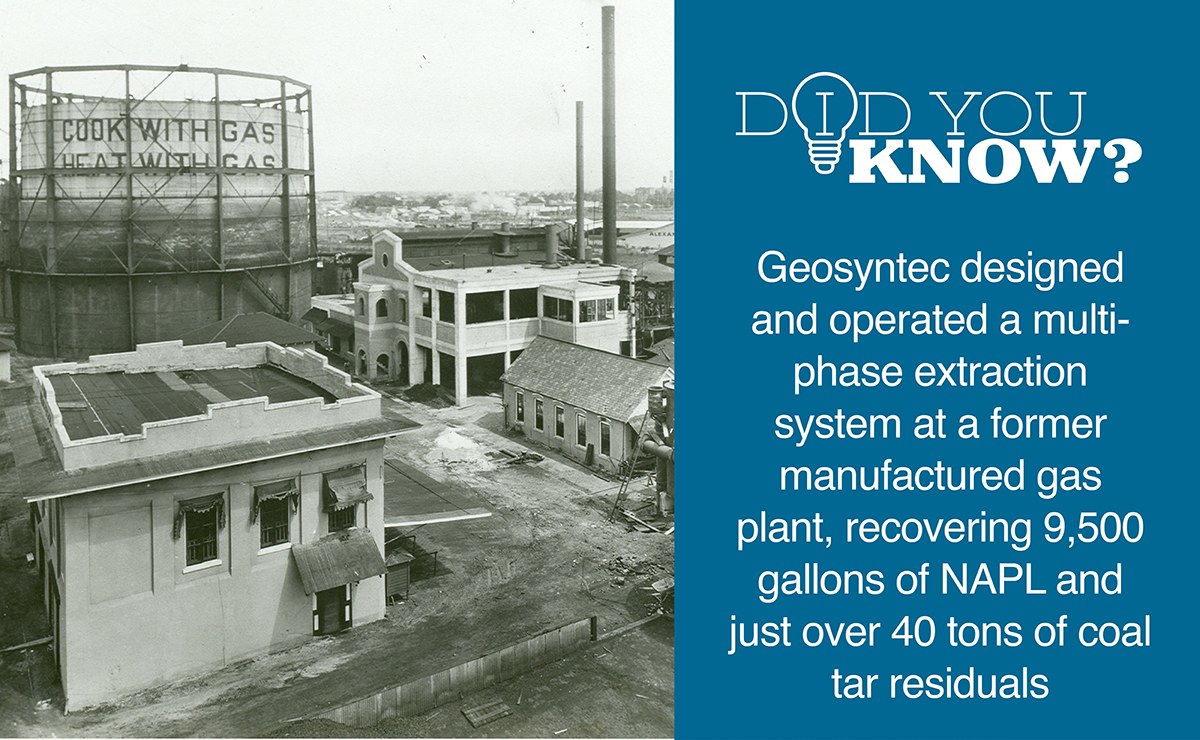 Remediation of a Former Manufactured Gas Plant Site
« All Projects

Geosyntec’s involvement began in 2014 upon completion of site assessment activities by others and included preparing a remedial technology screening summary that identified multi-phase extraction (MPE) as a viable treatment technology to remove mobile MGP coal tar residuals (NAPLs) and impacted groundwater from the shallow surficial aquifer. Following a successful pilot test, a full-scale MPE system was designed for phase implementation (Phase 1, 2 and 3) as an Interim Source Remedy (ISR). The MPE system was designed to increase system operational flexibility, to allow for versatile system control, and to reduce capital construction costs; the final system design included 44 MPE wells and was designed for operational flow rates of up to 100 gallons per minute (gpm). Supporting remedy implementation, Geosyntec prepared and procured permits for treated groundwater discharge, building construction, and right-of-way activities for MPE system construction and prepared detailed bid specifications for construction and equipment procurement. Additionally, Geosyntec conducted periodic operation and maintenance and reporting activities associated with the MPE system, with a focus on system optimization.

In conjunction with the MPE system design, Geosyntec prepared a Remedial Action Plan (RAP), which included capping of vadose zone, incorporation of the MPE system for mobile NAPL source treatment, and provided the proposed details of appropriate restrictive covenants and deed restrictions that will be recorded for the Brownfield site, including a Site Environmental Management Plan and a draft Engineering Control Maintenance Plan, to facilitate the redevelopment.

The design, implementation and operation of the MPE system was completed in under one year to fast track remedial activities. Through additional site assessment and phasing of MPE system implementation, the Phase 2 mobile NAPL area was reduced by approximately 60%, resulting in significant operational cost savings. During 3 years of operation, the MPE system recovered over 9,500 gallons of NAPL, just over 40 tons of MGP coal tar residuals, from the subsurface. FDEP has since approved the shutdown and completion of remedial goals for Phases 1 and 2. The implementation for Phase 3 area is underway.

In 2016, the Tampa MGP project was selected as the Grand Prize winner of the Excellence in Engineering and Science Award for the Small Project category hosted by the American Academy of Environmental Engineers and Scientists.