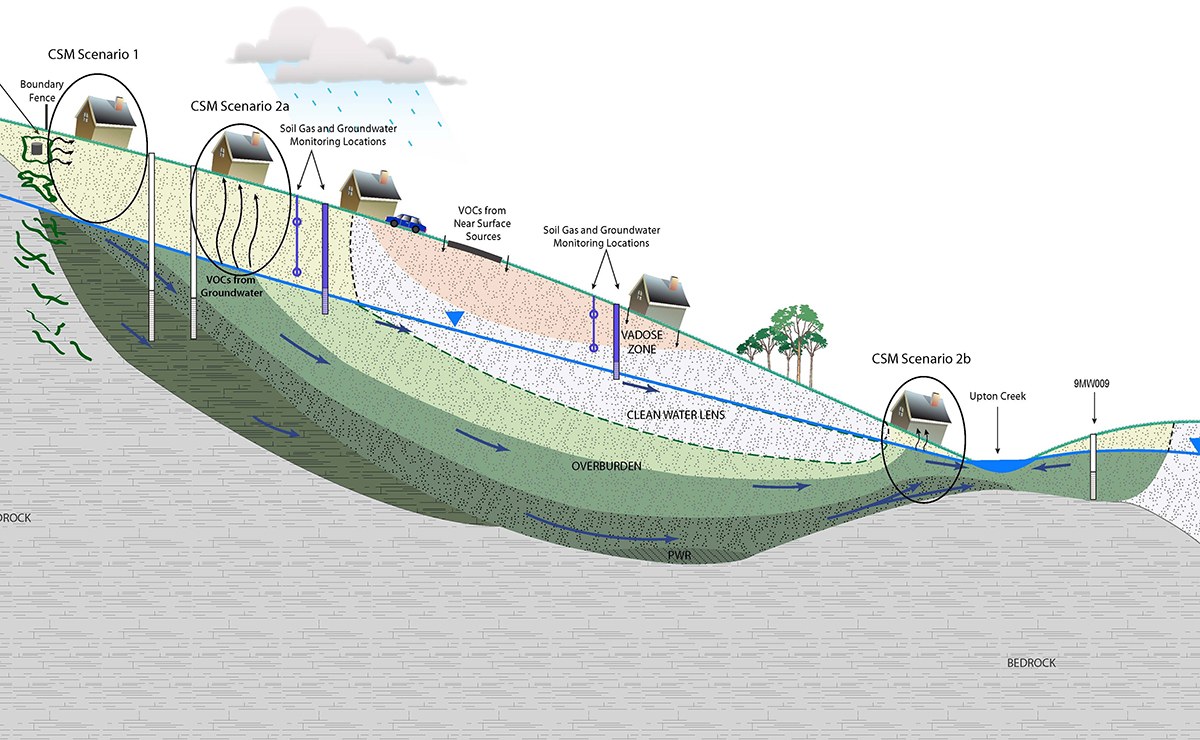 Under subcontract to SES Construction and Fuel Services, Geosyntec provided environmental services related to the subsurface-to-indoor air vapor intrusion (VI) pathway at off-site properties, many of which were residential, near Fort Gillem in Forest Park, Georgia.

Geosyntec's scope included developing and executing a plan to evaluate the VI pathway from subsurface contamination to hundreds of private buildings; acting as technical lead in meetings with the Georgia Environmental Protection Division and the USEPA Region 4; gaining consensus for the plan and study findings among stakeholders, including the Army, state and federal regulators, homeowners, and town officials; and designing and testing VI mitigation systems. Geosyntec used both desktop and field methods for testing. By adapting a spreadsheet-based method from the EPA, the firm created a site-specific forensic evaluation tool to analyze the large data set and produce a result that was transparent, repeatable, expedient, and compliant with EPA guidance.

For some buildings, potential contaminants of concern included Trichloroethene. Due to human health risks associated with exposure, Geosyntec rapidly assessed these locations. The firm created and sampled worst-case conditions using Building Pressure Control, the first test of its kind in Georgia. Using a blower door fan, Geosyntec personnel depressurized the buildings and sampled indoor air under induced VI conditions. The tests took less than a day to conduct and showed that no target volatile organic compound concentrations exceeded indoor air screening levels, even under the worst conditions.

Geosyntec developed the first adaptation of the EPA's VI spreadsheet in EPA Region 4 and the largest such application to evaluate the VI pathway during an active investigation of this size. The forensic evaluation tool used all analytical results to evaluate pathway completeness in each building and did so simultaneously for all buildings, media, and analytes. In most cases, subsequent assessments verified that indoor contamination originated from routine household activities and products and not from historical Army activity.

Geosyntec's novel approach allowed the Army to complete the investigation several months ahead of the projected schedule at approximately 80% of its cost estimate prior to Geosyntec's selection. The firm also increased public awareness of the chemicals found in common consumer products. As a result of Geosyntec's successful and innovative consulting engineering services, the ACEC awarded this project a 2017 Georgia Engineering Excellence Honor Award.