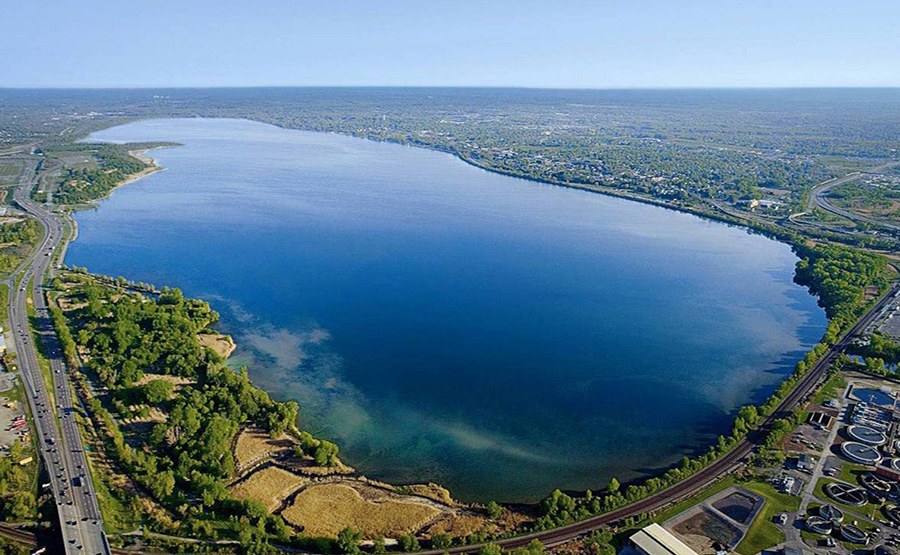 Prior waste disposal practices and stormwater runoff into Onondaga Lake, a 4.6 square-mile lake just northwest of Syracuse in central New York State, impacted water quality and sediments throughout the water body. As a result, stakeholders including U.S. EPA, New York State Department of Environmental Conservation, and industries with past operations in the vicinity of the lake began the process of negotiating a Consent Decree that would result in the restoration of lake water quality and ensuring that impacted sediments posed no undue threat to future human health or the ecology of the lake. The selected remedy contained in the Record of Decision (July 2005) includes the dredging of up to an estimated 2.65 million cubic yards of sediment from select portions of the lake. The dredged sediment will be placed in a sediment consolidation area (SCA) constructed on an adjacent Solvay waste bed, which historically received process wastes from former nearby industrial operations. The remedy will also include the use of isolation capping over an estimated 679 acres of the lake bottom. When fully implemented, it will be one of the largest sediment removal and consolidation projects in the U.S.

Among the goals of the Potentially Responsible Parties (PRPs) was the identification and selection of remedies that met not only the water quality restoration and ecological protection objectives but also was fiscally prudent and feasible from engineering and construction perspectives. The PRPs initially selected Geosyntec to provide technical advice on the engineering feasibility of proposed SCA designs that could become part of a future consent decree. That role expanded once the Consent Decree was finalized in January 2007.

Initially, Geosyntec provided technical expertise to the PRPs in preparation for meetings with key stakeholders working on the details of the proposed Consent Decree. Geosyntec led discussions with regulatory personnel regarding design criteria for the SCA, including liner system requirements and geotechnical stability criteria. After the Consent Decree was entered, Geosyntec became the Engineer-of-Record for the SCA. Our scope of work has included civil layout of the SCA, design of the liner and cover systems, geotechnical and stormwater management design, development of operational plans, and assessment of the use of geotubes. Geosyntec is interacting with other design teams in charge of dredging operations, wastewater treatment, and sediment capping. The firm is also assessing in-lake geotechnical stability issues associated with dredging and in situ isolation capping including conducting geotechnical stability analyses to ensure capping does not cause slope failures within the lake.

Geosyntec is also the Engineer-of-Record for the design of an innovative sealed sheet pile barrier wall to cut off migration of contaminated groundwater to the lake from an upland site. This barrier wall is essential to limiting sediment recontamination after completion of lake dredging and capping operations. More recently, Geosyntec microbiologists have been working with the sediment capping team to predict in situ biodegradation rates for contaminants in upwelling groundwater in capped areas of the lake.

Geosyntec's analysis of the laboratory and field data from the test fill demonstrated that the laboratory data could be used to predict the measured settlements of the test plot constructed over the Solvay waste bed. This demonstration supported the technical feasibility of constructing the SCA on the proposed waste bed. Geosyntec also led discussions among stakeholders that allowed the New York State DEC to consider the sediments deposited in the SCA equivalent in status to a non-mixed waste landfill. This status allows flexibility in the approach for designing the SCA lining system which will afford opportunities for significant cost savings.