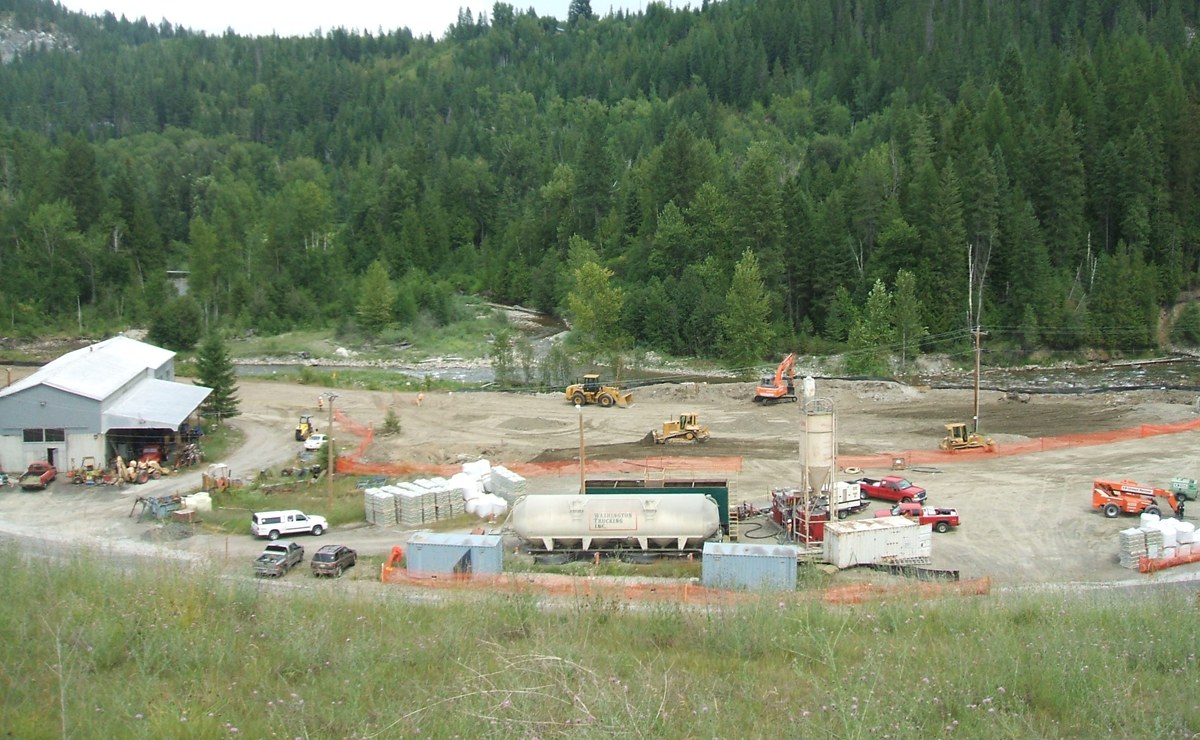 Groundwater Remedy for a Closed CKD Pile Site
« All Projects

A cement plant operated for close to nine decades on a remote location before production activities ceased and the plant was demolished. During operation, approximately 544,000 tons of cement kiln dust (CKD), a fine-grained cement byproduct consisting of highly alkaline material, was deposited in an adjacent unlined ravine.

Engineered low-permeability cover systems were constructed over the CKD pile (the Site) but, as a result of the continued interaction between groundwater and the alkaline CKD material, impacts to underlying groundwater quality were observed. The impacted groundwater was migrating downgradient to a pristine mountain stream. In addition to high pH (up to 13.9 standard units), the groundwater at the Site was leaching arsenic and other metals out of native soils into the groundwater. Arsenic was detected in groundwater at concentrations of over 300 micrograms per liter (µg/L), more than 60 times the 5 µg/L limit set by the the regulatory oversight agency.

Due to the remote location of the Site, the nature of the CKD impacts and closed CKD pile, and the complex issues related to mountain stream, a multi-disciplinary consultant was needed to develop and design an effective, low maintenance Groundwater Remedy resistant to the severe climate of the region.

Geosyntec performed a comprehensive review of the Site and developed solutions for addressing the ongoing issues, including an RI/FS with treatability and pilot studies. The Groundwater Remedy developed by Geosyntec is a low-maintenance, passive in-situ carbon dioxide diffusion membrane that controls the pH of the groundwater and causes arsenic and other metals to precipitate. A 45-foot long by 85-foot wide by 10-foot deep treatment zone was constructed with an in-situ series of silicone membranes to diffuse carbon dioxide into groundwater and baffles to prevent flow dead zones and preferential pathways. 10 feet thick soil-cement-bentonite gravity retaining walls contained the treatment zone and over 130 feet of streambank stabilization protected it from the mountain stream while providing habitat and mitigating against adjacent streambank erosion. Groundwater barrier walls and vertical drains were constructed to capture CKD-impacted groundwater and divert it to the treatment zone, while drain pipes were installed under the closed CKD pile to prevent groundwater contact. A wetlands mitigation site and riparian zone enhancements were also developed.

The in-situ Groundwater Remedy, which is the first known implementation of its kind, produces no waste byproduct and is treating the water with almost no downtime to pH and metals levels to NPDES effluent limits and Site cleanup levels. The Remedy helped avoid an extremely costly removal of the 544,000-ton CKD pile that was being advocated by the regulatory oversight agency. Over 99% up-time has been achieved at this remote Site location which requires a system that is durable, needs little maintenance, and is accessible from other locations.